Heads of nations with Hindu population, CMs to attend World Hindu Congress in US 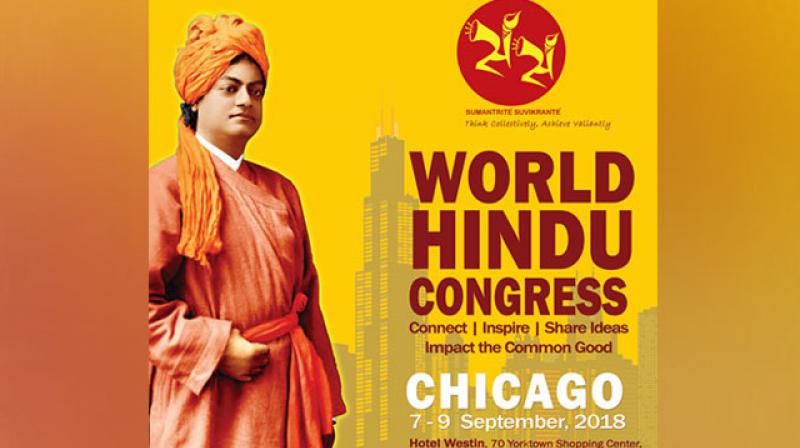 Billed as the biggest-ever gathering of the who's who of the Hindu community across the globe, the World Hindu Congress from September 7 to 9 is being held to commemorate 125 years of Swami Vivekananda's historic Chicago address on September 11, 1893. (Photo: Facebook | WorldHinduCongress)

Washington: Heads of several countries with a sizeable Hindu population, chief ministers of states, top corporate honchos and religious leaders are scheduled to attend the second World Hindu Congress or WHC in Chicago in September, organisers of the mega event said on Monday.

Billed as the biggest-ever gathering of the who's who of the Hindu community across the globe, the World Hindu Congress from September 7 to 9 is being held to commemorate 125 years of Swami Vivekananda's historic Chicago address on September 11, 1893.

The chief ministers who have confirmed their participation at the mega event include Yogi Adityanath from Uttar Pradesh and Devendra Fadnavis from Maharashtra.

Tibetan spiritual leader the Dalai Lama, Art of Living founder Sri Sri Ravi Shankar, and Pranav Pandya from Gayatri Parivar are among the religious leaders who have consented to attend the event.

Rashtriya Swayamsevak Sangh or RSS chief Mohan Bhagwat would also be addressing the mega event in Chicago, which is expected to be attended by more than 2,000 Hindu delegates from over 50 countries.

Tulsi Gabbard, the first Hindu lawmaker in the US Congress, is the chairperson of the Chicago event, which is being organised by World Hindu Foundation headed by former IITian Swami Vigyananand.

With India emerging as a global economic power, top corporate leaders from India, the United States and others parts of the world are likely to attend the three-day World Hindu Congress. Many of them include those heading Fortune 500 companies.

According to organisers, some Bollywood and Hollywood superstars will also be participating and addressing the mega event.

The purpose is to "ignite" the global Hindu community for its political and economic empowerment, Swami Vigyananand told a Washington audience yesterday on the occasion of the first anniversary of the Washington DC Chapter of the World Hindu Economic Forum (WHEF).

He said the purpose of the World Hindu Economic Forum is to make Hindus visible and respectable across the globe. "Hindus should be the dominant force in the world economy," Swami Vigyananand said.

Noting that some 30 years ago, China did not have the same importance it has today, Swami Vigyananand said the world is now paying attention to China, because of its economic power, which results in military power and global power.

"Our whole purpose is to regain economic strength," he said, as he urged the entrepreneurs present at the gathering to consider entire world as the market.

The inaugural World Hindu Congress held in New Delhi in November 2014 had seen participation of 1,800 delegates from over 50 countries.

Its seven parallel conferences showcase how the values, creativity, and entrepreneurial spirit of the global Hindu community find expression in a variety of spheres, including economic, education, media, organisational, and political, as well as the unique leadership and contributions of Hindu women and youth.

Held once every four years, World Hindu Congress is a global platform for Hindus to connect, share ideas, inspire one another and impact the common good.