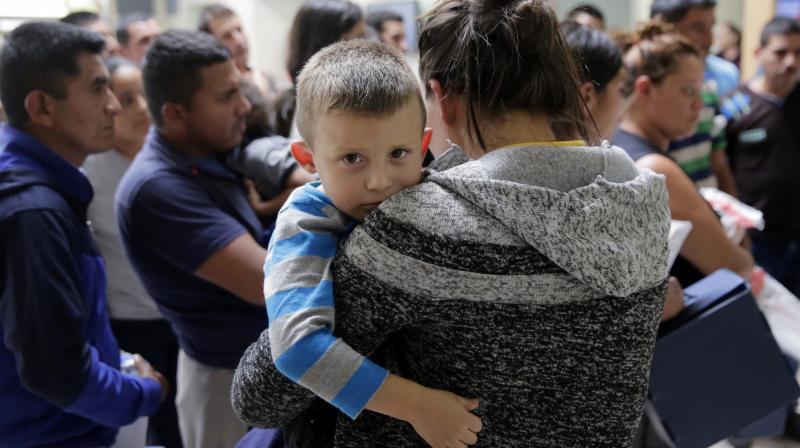 The Flores agreement is a long-standing guide as to how long the government can detain immigrant children. (Photo: AP)

Phoenix: The Trump administration says a ruling this week by a federal judge in San Diego requiring the government to reunify families separated at the border means authorities can legally keep families detained until their cases are complete.

The interpretation means immigrant families could spend months or even years in detention — even those seeking asylum — because of a years-long backlog in immigration court.

The Justice Department has said cases in which immigrants remain detained move through the system quicker than if they are released, but the backlog is still thousands of cases deep.

The Department of Justice said in a court filing Friday in Los Angeles that a case known as the Flores agreement allows the government to detain families now that the California judge has barred their separation.

"The Trump Administration has been engaged — since January of 2017 — in restoring order to the lawlessness at the Southwest border and protecting our nation's citizens, but we are beholden to a broken immigration system that Congress has refused to fix and that courts have exacerbated," the department said in a news release.

But the DOJ is zeroing in on the requirement, saying the order this week from US District Court Judge Dana Sabraw requires that children's release be delayed so that they can stay with their parents. Sabraw set a 30-day deadline for reuniting parents and children and called for young children to be reunited more quickly.

The ACLU is disputing the Trump administration's interpretation of the ruling. Lee Gelernt, deputy director of its Immigrants' Rights Project, said the government has a constitutional obligation to release parents who don't pose a flight risk or danger, and that parents can choose to release their children if they don't want them to be in a family detention centre.

"Ultimately the (San Diego) case leaves it up to parents to decide what is in the best interests of the child," Gelernt said. "It would be flatly unconstitutional if the government's purpose in detaining families is punitive or is intended to serve as a deterrent."

The administration has long-argued that releasing asylum-seekers who cross the border illegally amounts to catch-and-release and results in many not showing up for their court hearings.

The administration says it is enforcing a zero-tolerance policy requiring border agents to arrest and prosecute anyone caught crossing the border illegally. That resulted in more than 2,000 children being separated from their parents.