This year's total is the highest since 2010 when 132,106 fires were detected across the country. 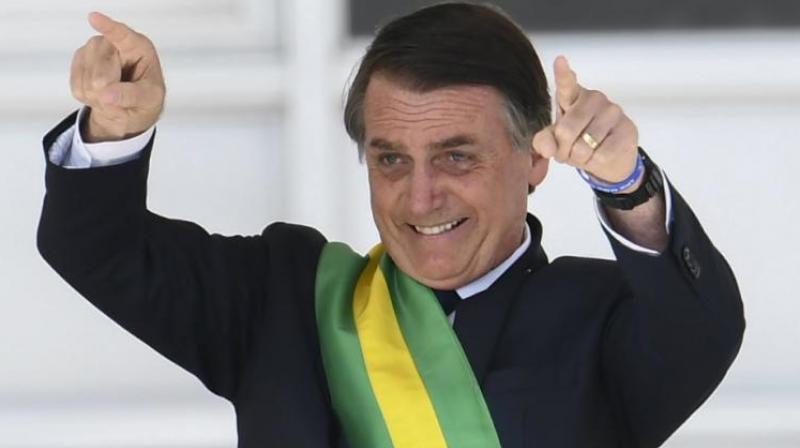 President Jair Bolsonaro said Friday that Europe has 'nothing to teach' Brazil about preserving the environment, as the country aligns itself with the United States over fires raging in the Amazon rainforest. (Photo: File)

Ariquemes: President Jair Bolsonaro said Friday that Europe has "nothing to teach" Brazil about preserving the environment, as the country aligns itself with the United States over fires raging in the Amazon rainforest.

The far-right leader's comments come as the latest official data show thousands of new fires were ignited across Brazil on Thursday -- the first day of a ban on burning -- with most of them in the Amazon basin. Offers of international help to combat the worst fires in the Amazon in years have been made, but the issue has provoked accusations in Brazil that foreign countries -- particularly in Europe -- were trying to meddle in its affairs.

Brazil has found an ally in the United States where President Donald Trump praised Bolsonaro's handling of the crisis and offered US assistance. After meeting Trump at the White House on Friday, Brazilian Foreign Minister Ernesto Araujo said the two countries had similar views on the fires.

The talks were also attended by Bolsonaro's son and hopeful ambassador to the United States, Eduardo. "I think we're on the same page, the governments are on the same page," Araujo told reporters, explaining that this means pushing back against what he said was interference in Brazil's affairs by foreign governments concerned over the rainforest's future.

Bolsonaro has accused France and Germany of "buying" Brazil's sovereignty after the G7 group of rich democracies offered USD 20 million in Amazon fire aid. He initially rejected the money unless his French counterpart Emmanuel Macron withdrew "insults" made against him.

Bolsonaro later said Brazil would accept bilateral aid to fight the fires, but has insisted the Latin American country must control the money. Chilean President Sebastian Pinera announced that his country will send four water bombers to help fight the Brazilian blazes. That is being done "thanks to financing from the G7 countries," Pinera said.

On Wednesday Trump said the United States was ready to help Brazil fight the fires and criticised the G7 for failing to consult Bolsonaro over its initiative. The Brazilian president told reporters he would talk to German Chancellor Angela Merkel, and repeated a demand that "our dear Macron" retract remarks relating to Brazil's sovereignty over the Amazon before he would speak to him. "Europe has nothing to teach us about preserving the environment," Bolsonaro said, reiterating his plan for "sustainable exploitation" of the Amazon.

Bolsonaro later tweeted that he had a "productive" conversation with Merkel, who he said "reaffirmed Brazilian sovereignty over our Amazon region."

On the eve of the G7 summit last week, Macron declared the forest fires, which are also affecting Bolivia, an "international crisis" and put them on the agenda of the gathering.

Macron also accused Bolsonaro of lying to him about Brazil's climate change stance. Bolsonaro reacted furiously, accusing Macron of having a "colonialist mentality."

On Friday the Brazilian leader said he will stop using disposable pens made by France's Bic. Under growing pressure to do more, Bolsonaro issued a nationwide 60-day ban on burning that took effect Thursday.

Activists quickly doused hopes that the prohibition would work in the remote Amazon region where deforestation has surged this year as agencies tasked with monitoring illegal activities were weakened.

On the same day as the ban took effect, 2,300 new fires were detected -- most of them in the Amazon basin -- taking the total number for this year to 87,257, the latest figures from the National Institute for Space Research show. Nearly 1,500 of the new fires were in the vast Amazon basin.

This year's total is the highest since 2010 when 132,106 fires were detected across the country. Para was the hardest hit state on Thursday, with 587 new blazes -- up 67 per cent from the previous day.

Police on Thursday arrested three people for burning several thousands hectares (acres) in a conservation area in Para. Thousands of troops and firefighters, along with aircraft, have been deployed since the weekend, and the defense ministry says the fires are under control.

Bolsonaro claimed in a live broadcast on Facebook on Thursday that "this year's fires are below the average of recent years."