Beijing back to old ways of threatening Taiwan: Tsai Ing-wen

China maintains a standing threat to use force to achieve its goal of absorbing Taiwan. 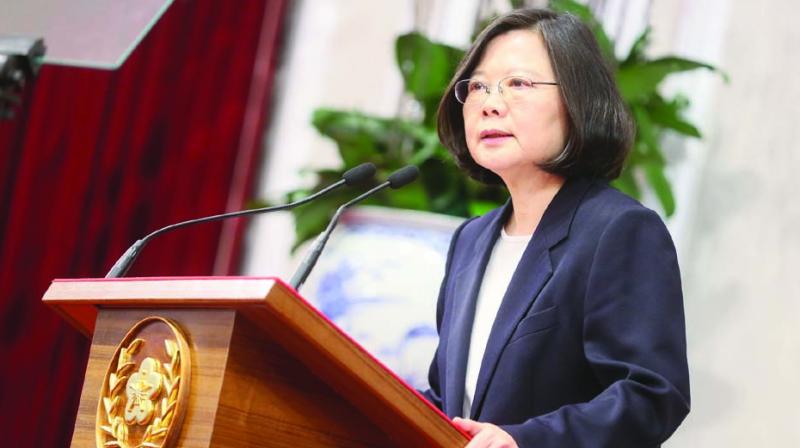 Taipei: Taiwan’s leader on Saturday urged China to engage in “calm and rational” dialogue to maintain peace, vowing not to give in to Beijing’s recent moves to “threaten and intimidate” the self-ruled island.

“As long as we can be calm, rational, and maintain a flexible attitude, I believe we should be able to find a solution that allows both sides to maintain peaceful and stable relations,” President Tsai Ing-wen said in a year-end news conference. Tensions have grown since China suspended contacts with Ms Tsai’s administration in June over her refusal to endorse China’s claim that Taiwan and the mainland are part of a single Chinese nation.

China maintains a standing threat to use force to achieve its goal of absorbing Taiwan. Referring to such recent actions, Ms Tsai said Beijing had been “gradually returning to the old ways of dividing, suppressing and even threatening and intimidating Taiwan. We hope that this is not a policy decision of the Beijing authorities”.

“We will not yield to the pressure nor go back to the old ways of confrontation,” Ms Tsai said. Beijing has ratcheted up efforts to diplomatically isolate Taiwan, intervening to prevent the island’s participation in international forums and establishing diplomatic relations with former Taiwan allies Gambia and Sao Tome and Principe.

“Whether cross-strait relations can be turned around next year depends on our patience and belief,” Ms Tsai told reporters. Ms Tsai is scheduled to transit through the when she travels to Central America in January, stopping in Houston and San Francisco.