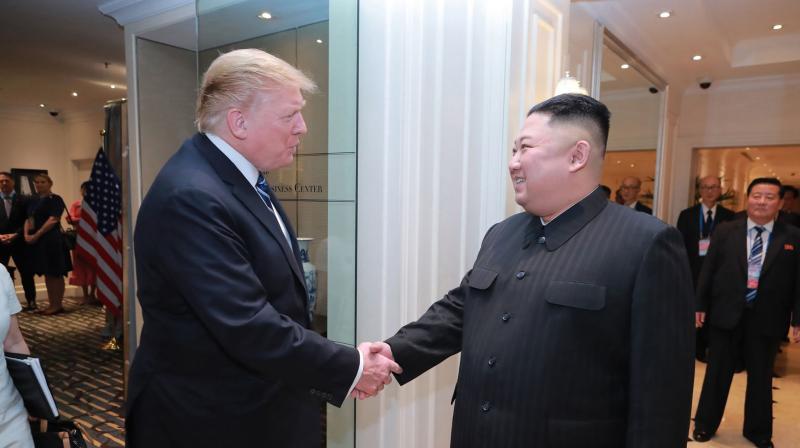 The highly anticipated meeting in Vietnam was supposed to build on the leaders' historic first summit in Singapore last year. (Photo:AP)

Seoul: North Korean leader Kim Jong-un and US President Donald Trump have agreed to continue "productive" discussions on denuclearisation, Pyongyang's state media said Friday, hours after a summit between the two leaders in Hanoi ended abruptly with no agreement.

The highly anticipated meeting in Vietnam was supposed to build on the leaders' historic first summit in Singapore last year, but the latest talks ended in deadlock with Washington and Pyongyang giving starkly different accounts of the reasons behind the impasse.

On Friday however, the North's official KCNA news agency said that Kim and Trump had "agreed to continue having productive talks to discuss the denuclearisation of the Korean peninsula and the improvement of US-North Korea relations".

"Chairman Kim and President Trump have expressed their confidence that North Korea-US relations can achieve groundbreaking improvements if they collaborate together with patience and wisdom, although there are many unavoidable obstacles ahead", KCNA said, making no mention of the breakdown of the high-stakes summit.

Ri told reporters the North had offered to dismantle its Yongbyon nuclear plant in exchange for partial sanctions relief, while Trump had earlier said that Pyongyang had demanded the lifting of all sanctions imposed over the country's banned nuclear weapon and ballistic missile programmes.