Bangladesh has been witnessing a spate of attacks on secular activists, foreigners and religious minorities since 2013. 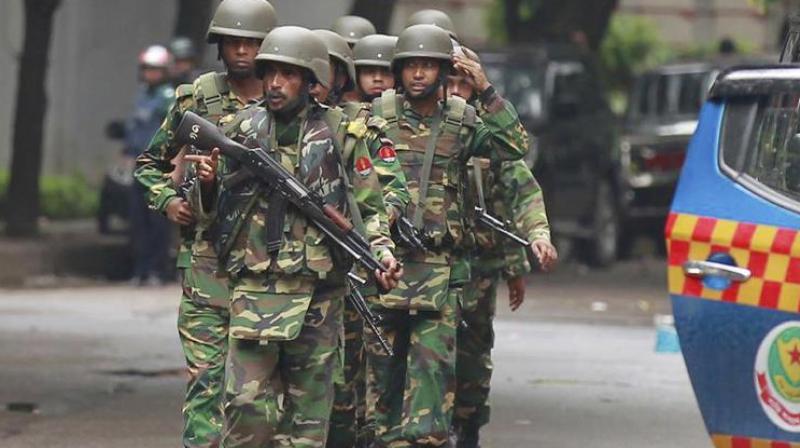 Neo-JMB  was behind the July 1 terror attack on a Dhaka cafe that killed 22 people, including 17 foreigners. (Photo: AP)

Dhaka: Three militants, including a woman,were found dead by Bangladesh security forces Saturday when they stormed their hideout, ending a two-day stand off with Islamist militants in a northeastern city amid a massive nationwide clampdown on militants.

Announcing the end of the "Operation Maximums" at the Islamist militants hideout in Moulvibazar town's Borohat area, counter-terrorism Unit chief Monirul Islam told media that bodies of two men and a woman were found inside the duplex house.

"We found three bodies including that of a woman as we entered the den today," Islam said, adding the militants had set up explosives at different spots in the building.

"Our intension was to capture them alive and therefore we repeatedly called them to surrender but they defied...attacked us back throwing grenades and blasting bombs whenever our SWAT members tried to approach them," he said.

Police's elite Special Weapons and Tactics (SWAT) Friday launched the second subsequent raid at the hideout in Moulvibazar town, a day after wrapping up their "Operation Hit Back" at another den nearby when a family of eight, including children, blew themselves up in a suicide blast amidst the security siege.

Security forces in the past 10 days have witnessed four major anti-militancy assaults against Islamic-State inclined Neo-Jamaatul Mujahideen Bangladesh (Neo-JMB) in which seven people including an army lieutenant colonel and two police inspectors lost their lives while the assaults killed 15 militants and their children.

Neo-JMB  was behind the July 1 terror attack on a Dhaka cafe that killed 22 people, including 17 foreigners.

The first security assault was launched in northeastern Sylhet where authorities called out army commandos. Four Islamists including Neo-JMB chief Musa were killed during the five-day security siege which military called 'Operation Twilight'.

As the siege was underway, fellow militants from outside launched two retaliatory clandestine attacks killing six people including two policemen and wounding 50 others near the scene.

An army officer who was serving a the intelligence wing chief of elite anti-crime Rapid Action Battalion (RAB) succumbed to his wounds two days ago.

A day after the end of the Operation Twilight led by an army major general in Sylhet, police simultaneously raided three other neo-JMB hideouts, two in neighbouring Moulvibazar and one in central Comilla district.

Police's Operation Hit Back saw two militant couples blowing themselves up along with four minor children, staging a suicide blast at a den on the outskirts of Moulvibazar town.

Islam at that time said the suicide blast was so severe that it tore into pieces the dead, making it difficult to ascertain exactly how many people were inside and only "the forensic examinations could confirm the exact casualty figure (though) we assume they are seven or eight in number."

In Comilla, after three days of security siege, police found it to be a big cache of explosives stored by the militants but none was found there to be encountered.

Bangladesh has been witnessing a spate of attacks on secular activists, foreigners and religious minorities since 2013. The country launched a massive crackdown on militants specially after the Dhaka cafe attack.

ISIS has claimed several attacks in Bangladesh, but the government rejects the presence of foreign terrorist groups in the moderate Muslim-majority country, blaming home-grown groups such as the neo-JMB for terrorist attacks.