Jamaat-ul-Ahrar (JuA), a faction of the umbrella Tehreek-e-Taliban Pakistan claimed the attack. 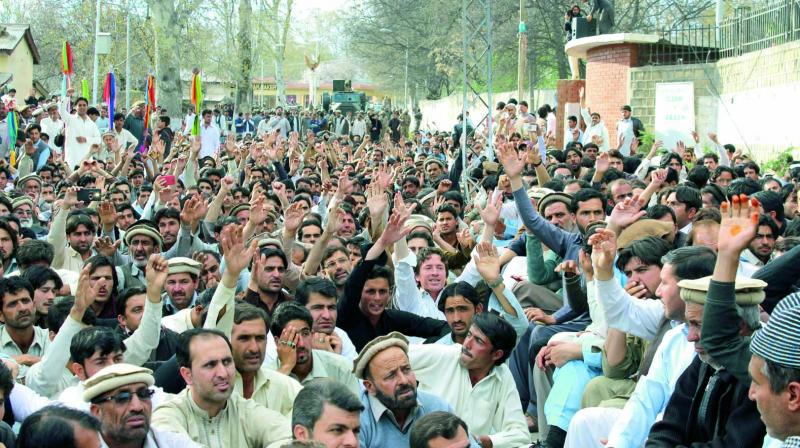 Mourners gather as they shout slogans during a protest following a powerful car bomb explosion that killed at least 25 at a busy market in Parachinar. (Photo: AFP)

Islamabad/Peshwara: At least 25 people were killed and 65 others injured on Friday when a powerful car bomb ripped through a crowded market outside a Shiite imambargah in Pakistan’s restive northwest tribal region in an attack claimed by the Pakistani Taliban.

The car bomb went off near the main gate of the imambargah at Shendak bazaar in Parachinar central bazar of Parachinar, capital of Kurram tribal district, where a large number of people were shopping for fruits and vegetables.

Survivors described hiding inside shops after hearing a “huge bang”, then stumbling through dust-choked air filled with the sound of screams, tripping over bodies as they searched for the wounded in the busy market.

Eyewitnesses said security personnel were busy checking worshippers at the central imambargah’s entrance for women, when an unidentified person parked a car next to the building where it exploded.

The injured were rushed to district headquarter hospital in Hangu and Kohat for treatment. A local paramedical staff said the injured were in critical condition. Scores of vehicles were also damaged in the blast.

Jamaat-ul-Ahrar (JuA), a faction of the umbrella Tehreek-e-Taliban Pakistan claimed the attack.

The group was also part of the wave of attacks which shook the country in February, claiming responsibility for a suicide bomb in Lahore which killed 14 people.

February’s assaults also included a suicide blast at a Sufi shrine in Sindh province which killed 90 people and was claimed by Islamic State.

The wave of violence dented optimism after the country appeared to be making strong gains in its decade-and-a-half long war on militancy, with analysts speaking of a militant resurgence.

Pakistan’s powerful army launched a crackdown and temporarily closed the border with Afghanistan, which it accused of harbouring the militants who had carried out the attacks.

Prime Minister Nawaz Sharif expressed grief over the blast and condemned the attack. “It is our responsibility to continue the war against terrorists,” he said. “The network of terrorists has already been broken and it is our national duty to continue this war until the complete annihilation of the scourge of terrorism from our soil,” he said.

But Shiite leaders and residents angered by the attack, the second major blast in Parachinar this year, quickly accused security forces of failure, with small spontaneous protests numbering dozens of people breaking out. Interior minister Chaudhry Nisar Ali Khan ordered an inquiry into the blast.