The gathering on May 9 will bring together the South's President Moon Jae-in, Japanese PM Shinzo Abe and Chinese Premier Li Keqiang. 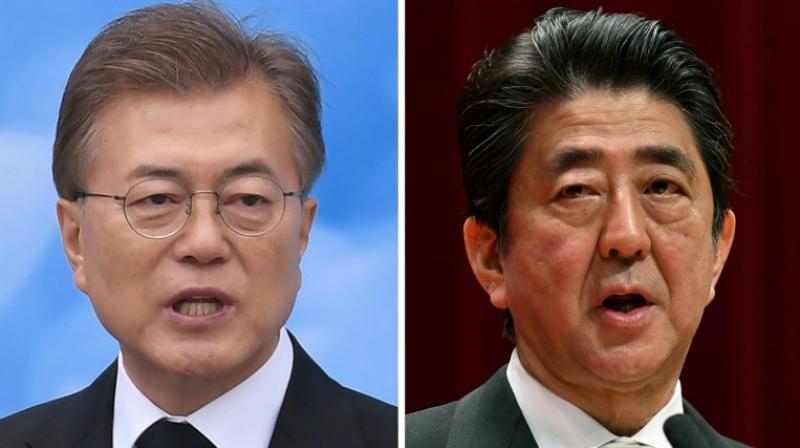 The gathering of South Korean, Japanese and Chinese leaders is the latest move in a diplomatic whirlwind centred around North Korea. (Photo: AFP)

Seoul: South Korea, China and Japan will hold a Trilateral summit in Tokyo next week, Seoul announced on Tuesday, the latest move in a diplomatic whirlwind centred around North Korea

The gathering on May 9 will bring together the South's President Moon Jae-in, Japanese Prime Minister Shinzo Abe and Chinese Premier Li Keqiang, in the neighbours' first such meeting for more than two years.

It follows a historic and headline-grabbing summit between Moon and the North's Leader Kim Jong-un last Friday. They vowed to pursue denuclearisation and a peace treaty to formally end the 1950-53 Korean War, setting the mood for Kim's much-anticipated face-to-face encounter with US President Donald Trump

But analysts have urged caution, warning that similar previous pledges have come to nothing, and that the North has yet to make clear what concessions it is willing to make with its nuclear weapons and ballistic missiles.

All three of the neighbours are deeply involved with North Korea-- the South as its neighbour, key US ally Japan as a sometime target for its threats, and China as its key diplomatic backer and business partner.

Friday's summit, in which Kim and Moon exchanged smiles, handshakes and warm words in front of the world's cameras, was a marked contrast to the tensions of last year.

The North staged its most powerful nuclear test to date and launched missiles capable of reaching the US mainland as Kim and Trump traded threats of war and personal insults, sparking global security fears.

The thaw between the Koreas, triggered by The Winter Olympics in the South, has repercussions for the geopolitics of the region.

Japan has long maintained a hardline position on negotiations with Pyongyang but has found itself left on the sidelines.

With concerning growing in Tokyo over whether it should change tack, a hawkish Abe expressed a willingness to meet Kim -- a message which Moon relayed to the North's Leader during the summit.

Kim said in response he was "willing to talk to Japan any time", Moon's office said on Sunday, adding the South's Leader would be "happy to build a bridge" between the two nations.

But Moon's trip to Tokyo will be the first visit by a South Korean Leader to Japan in more than six years, with relations between the two US allies marred by disputes over history and territory.

During a day-long visit to Tokyo, Moon will "share the result of the inter-Korea summit and discuss ways to strengthen Trilateral cooperation to denuclearise and establish peace on the Korean peninsula", Moon's office said in a statement.

In Tokyo, Moon will also have a separate summit with Abe to discuss ways to develop "future-oriented ties" with Japan, it added.

The South and Japan face a common threat from the North's rapidly-advancing nuclear weapons and missile technology, but have locked horns over the issue of South Korean women forced into sexual slavery for Japanese soldiers during World War II, and a row over Seoul-controlled islets claimed by Tokyo

The two Koreas share a bitter resentment over Japan's brutal 1910-45 occupation of the peninsula and the so-called "comfort women" are a hugely emotional issue in the South.

Moon's predecessor Park Geun-hye reached a controversial deal with Japan in 2015 under which Tokyo offered one billion yen (USD 8.3 million) to the victims.

But some of them slammed the deal, saying it did not oblige Japan to take legal responsibility, and Moon has repeatedly urged Tokyo to do more.

Life-size bronze statues of a girl symbolising "comfort women" have been installed in front of the Japanese embassy in Seoul and its consulate in Busan. Dozens of activists clashed with police today as they attempted to set up another statue commemorating slave labourers at the Busan site.

Ties are further strained by the islets called Dokdo in Seoul and Takeshima by Tokyo. This dispute was referenced by Seoul at the inter-Korean summit with a banquet dessert featuring a peninsula map including them, drawing an angry protest from Japan.

The last visit by a South Korean Head of State to Japan was 2011 when then-President Lee Myung-bak met then-Japanese Prime Minister Yoshihiko Noda. But ties soured after Lee made a surprise visit to Dokdo a year later.