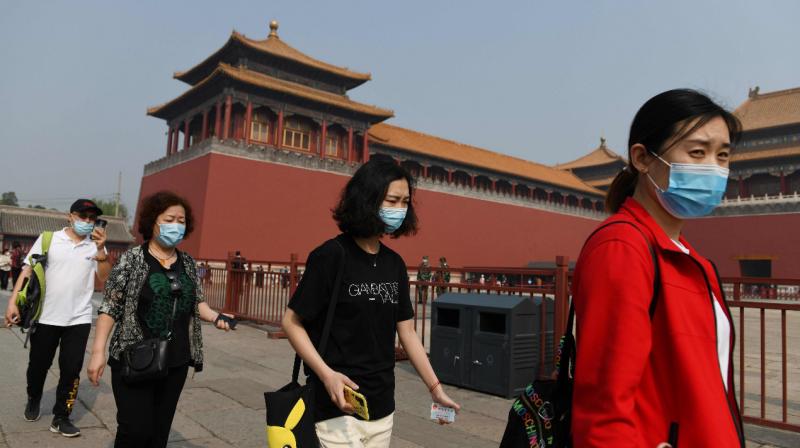 People wear face masks amid concerns of the COVID-19 coronavirus as they walk to the entrance of the Forbidden City, the former palace of China's emperors, in Beijing. (AFP)

Shanghai: With optimism and a heavy dose of caution, millions of Chinese hit the road or visited newly re-opened tourist sites on Friday for an extended national holiday in a post-coronavirus confidence test.

Officials have cast the five-day Labour Day observance as an opportunity to ease pent-up travel demand in the country where the pandemic emerged and which was first to impose stifling mass quarantines and other travel curbs.

Caution reigned at sites like the Forbidden City imperial palace in the heart of Beijing, which reopened for the first time in three months.

People queued up two metres apart beneath its high red walls as a female voice on a loudspeaker told them: "Don't crowd together, keep your distance, protect yourself."

A staff member held up a sign instructing visitors not to spit.

Around 117 million people are expected to travel during the May 1-5 break, according to forecasts from China's transport ministry, as the country pushes to return to normal life while also guarding against new infections.

That will be just one-third of the passenger flows during last year's holiday, due to the lingering fear of packing into trains and planes.

But that will still see the biggest movement of travellers since China began weeks ago to ease restrictions as new COVID-19 case numbers plummeted.

"We hope this can be a turning point, and that we can show the world that the epidemic can be overcome," said Bao Ping, a 46-year-old Shanghai insurance agent, who strolled along the city's picturesque Bund riverfront with his wife and teen daughter -- all in medical masks.

Authorities have advised people against long-distance travel, in favour of shorter excursions within their city or province.

Many indoor attractions will remain closed while those still open can admit only 30 percent of their normal numbers.

The Forbidden City quickly sold out of entry tickets after capping visitors at just 5,000 a day, down from 80,000 normally.

The thinner crowds were met with approval from one young woman wielding a selfie stick.

"It's so great! You can really enjoy it," she said to her boyfriend.

The far larger travel rush for the Lunar New Year holiday in January has been blamed for spreading the virus from its origins in the central city of Wuhan to the rest of China and the world.

But while much of the world is still under lockdown, China has returned to work and reopened schools.

'The danger is still great'

The government and state-controlled media have expressed hope that an infection-free holiday could signal China's triumph over the COVID-19 outbreak.

But a 36-year-old Beijing woman surnamed Li, out walking her dog, said she was still holding off from travel or gatherings with loved ones.

"I'm not going to neglect to protect myself just for a little pleasure, because the danger, even if it is invisible, is still great," she said.

The pandemic has hit travel particularly hard, and China's massive market is being watched as a proxy for how quickly the world can return to normal.

"All eyes are on China as a potential leading indicator of the shape of the recovery that could be expected," aviation analytics firm Cirium said last week.