He held talks with Don Pramudwinai of Thailand and Winston Peters of New Zealand separately and discussed issues of mutual interest. 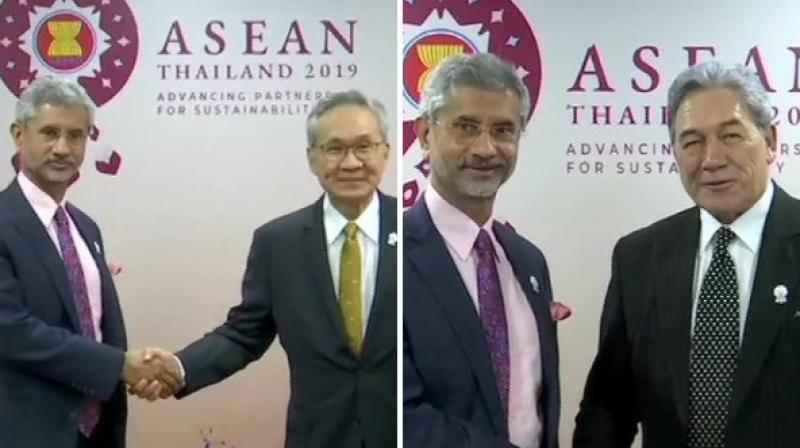 He held talks with Don Pramudwinai of Thailand and Winston Peters of New Zealand separately and discussed issues of mutual interest, including BIMSTEC cooperation and Indo-Pacific.

Jaishankar is scheduled to co-chair the 10th MGC Ministerial Meeting with Vietnam's Deputy Prime Minister and Minister of Foreign Affairs and International Cooperation, Prak Sokhonn, in the afternoon on August 1.

"The meeting will review practical cooperation under the MGC framework, adopt the MGC Plan of Action (2019-2022), and also discuss the various commemorative activities planned next year to celebrate the 20th Anniversary of the MGC, which is the oldest sub-regional cooperation framework set up by the Mekong countries, namely Cambodia, Lao PDR, Myanmar, Thailand and Vietnam with any external partner," an MEA statement said.

On August 2, the 9th EAS FMM would be held to discuss preparations for the East Asia Summit, scheduled to be held in Bangkok on November 4 this year.
"In this context, the ministers will discuss the implementation of the Manila Plan of Action (2018-2022) to implement the Phnom Penh Declaration on the EAS Development Initiative, adopted by the EAS Leaders in 2012," the statement said.

"They will also deliberate on the current regional and international issues and on further strengthening of the EAS as the region's prominent leaders-led forum for discussion on global political-security and economic issues," it added.

Later in the afternoon, Jaishankar is slated to attend the 26th ARF. The forum will focus on joint programs and activities by the member-states and organisations to foster the habit of cooperation and build strategic trust in the region.

Both at the EAS and ARF, Jaishankar will enumerate India's Indo-Pacific vision, which was elaborated by Prime Minister Narendra Modi in his address at the Shangri La Dialogue in Singapore in June last year.