Communism in China at 70 --- success and excess

At 70, China’s Communist Party becomes the second-longest ruling party in history, about a year behind its neighbour, North Korea. 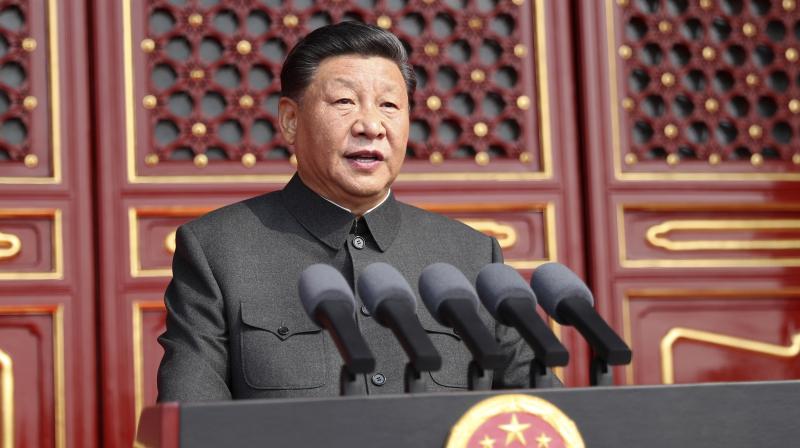 In this photo released by China's Xinhua news agency, Chinese President Xi Jinping delivers a speech at a parade to celebrate the 70th anniversary of the founding of the People's Republic of China, at the Tiananmen Square in Beijing. (Photo: AP)

Beijing: China marks 70 years of communist party rule on Tuesday with a major military parade in Beijing and celebrations nationwide. Chinese authorities have left nothing to chance in their meticulous planning for the biggest national anniversary since president Xi Jinping came to power.

The capital has been put on lockdown, with bans on everything from kites and homing pigeons to drones. People who live along the parade route have lived with curfews all week and were asked to leave their homes ahead of the National day. 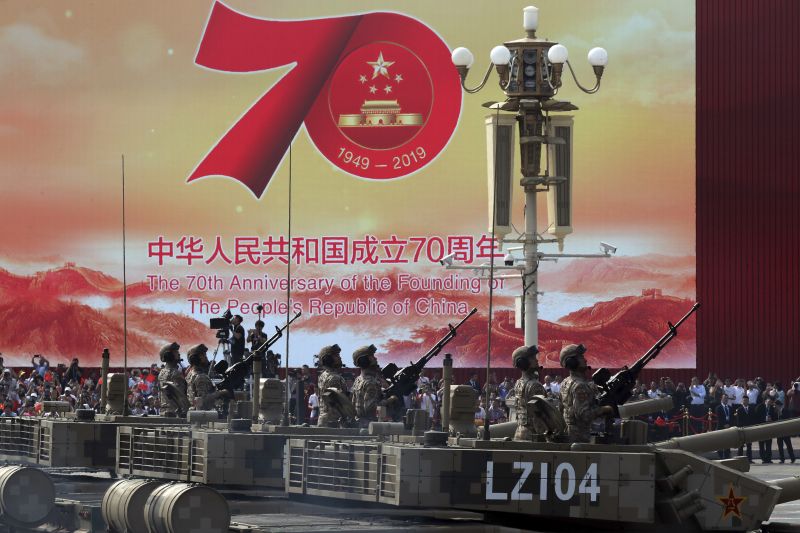 Army vehicles roll down during a parade to commemorate the 70th anniversary of the founding of Communist China in Beijing. (Photo: AP)

This day is usually marked with speeches, flags, fireworks and the like. However, October 1, 2019, will see “mass pageantry,” including a military parade, as 2019 carries particular significance for President Xi Jinping, marking 70 years of Communist Party rule.

Timeline of The people's Republic of China at 70

1949: After more than 20 years of civil war, Mao Zedong leads the communists to victory over the nationalists, and proclaims the founding of the People's Republic of China on 1 October.

1958: China launches a five-year economic plan, the "Great Leap Forward", collectivising farming and investing in heavy industry. The plan is abandoned after two years after poor harvests lead to starvation and millions of deaths.

1966–1976: The 10-year "Cultural Revolution" causes economic and political upheaval, as Mao attempts to purge communist China of remaining capitalist and traditional elements of society, and enforce Maoism as the dominant and permanent ideology.

1989: Troops fire on protesters in Tiananmen Square who had been campaigning for greater freedom and democracy. The uprising is crushed.

1990: The opening of the Shanghai and Shenzhen stock exchanges symbolise the increasing economic liberalisation of China.

1997: Control of Hong Kong is handed back to China from the UK. Two years later Portugal transfers the sovereignty of Macau back to the Chinese.

2003: Yang Liwei becomes the first Chinese astronaut. Within 10 years the country will successfully deploy a robot rover on the moon.

2007: After years of tension, including riots over how Japanese schoolbooks are accused of portraying the events of the second world war, and tensions over territorial claims in the South China Sea, Wen Jiabao becomes the first Chinese prime minister to address Japan's parliament.

2016: The Chinese economic "miracle" falters, as growth falls to its lowest level for 25 years.

2018: China becomes increasingly embroiled in a trade war with the US. Xi Jinping is cleared to be president for life

2019: A series of major pro-democracy protests in Hong Kong challenge Chinese rule there.

What is National Day?

The People’s Republic of China was founded on October 1, 1949, after the Communist Party, led by Mao Zedong, defeated the Nationalist Party in a civil war, following the end of Japanese occupation during World War II.

On that day, a ceremony was held in Tiananmen Square to celebrate the formation of the Central People’s Government. It included a parade by the People’s Liberation Army and an address by Mao Zedong, the country’s new leader, from the nearby Gate of Heavenly Peace.

Tuesday’s ceremony, like those of the past seven decades, echoed the pageantry of that first National Day. Xi oversaw a military parade after delivering a speech. For many Chinese people, it is a day of patriotic celebration that is followed by a weeklong holiday.

National Day is a holiday in Hong Kong too, and workers and students who have the day off are expected to hold anti-government protests.

It is unclear what will happen in Hong Kong on Tuesday, but the party will be hoping the world sees images of orderly troop formations and dancing civilians in Beijing rather than huge protests in Hong Kong.

How Beijing celebrated its 70th anniversary?

Beijing was the centre of the action. In an 80-minute parade, the military was showing off new weapons, including an intercontinental ballistic missile capable of reaching the United States; supersonic and hypersonic drones; and tanks and fighter jets. 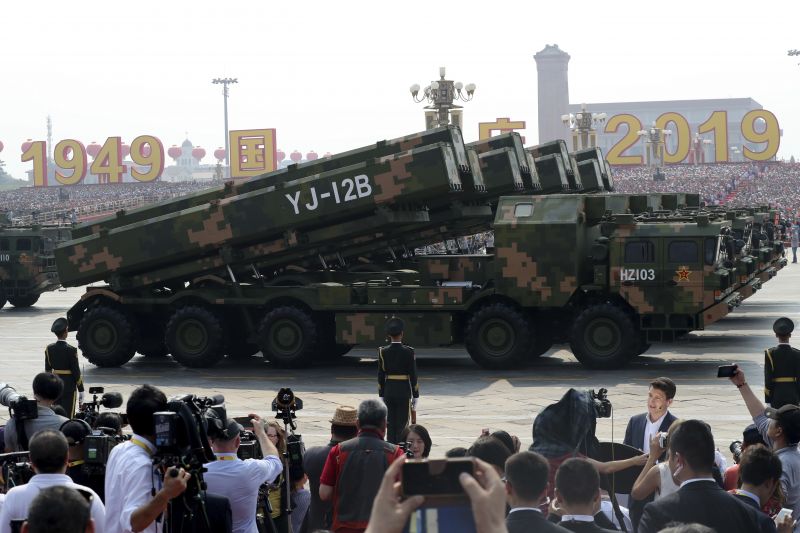 Military vehicles roll down during a parade to commemorate the 70th anniversary of the founding of Communist China in Beijing. (Photo: AP)

Xi, the most powerful Chinese leader in decades, used his opening speech before the parade to highlight the Communist Party’s role in “the advance of the Chinese people and the Chinese nation.”

Xi also attended a “grand evening gala” in Tiananmen Square, where party and state leaders and members of the public watched unspecified performances and a fireworks display. 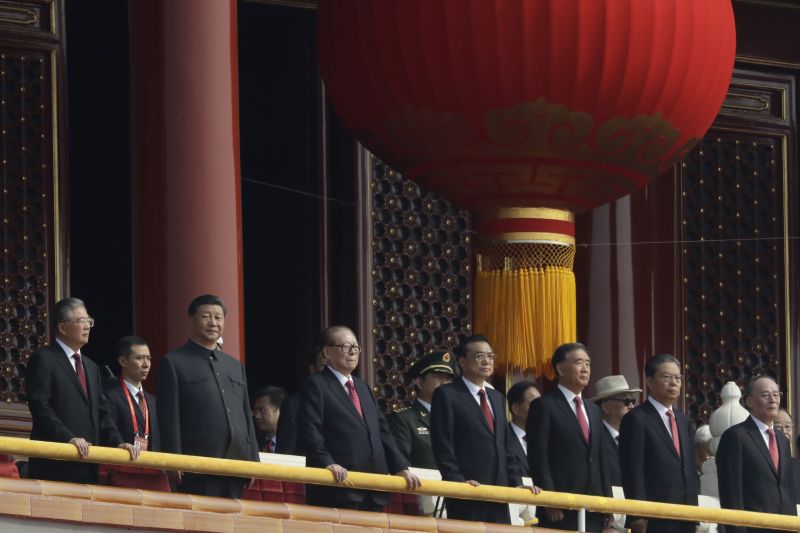 At least 100,000 people took part in “mass pageantry,” with some 60,000 attending the evening gala, according to Chinese state media.

China has not invited foreign leaders, but foreign ambassadors based in Beijing would attend. Retired Chinese leaders were on the podium with Xi, perhaps including former president Jiang Zemin, who at 93 is still active behind the scenes.

At 70, China’s Communist Party becomes the second-longest ruling party in history, about a year behind its neighbour, North Korea.

But in January, Xi summoned ministers and provincial chiefs to Beijing to warn that “major risks” abound and their “long-term rule” wasn’t guaranteed. The speech came the same day China reported its slowest annual economic growth since 1990, in the wake of the Tiananmen Square crackdown (the 30th anniversary of that event this year went unmarked).

The communist state has now outlived the Soviet Union that was once its sponsor and supporter; Chinese officials for years have studied the collapse of the USSR in a bid to avoid a similar fate for the PRC.

A risky road ahead for China?

The recent global trade war started by United States President Donald Trump and other moves --- such as sanctions imposed on Huawei Technologies Co.-- that China sees as intended to hinder its growth and technological progress.

In few days, Chinese Vice Premier Liu He, US Trade Representative Robert Lighthizer and Treasury Secretary Steven Mnuchin are scheduled to meet as the tensions take a toll on both their economies.

At the same time, Hong Kong’s months-long protests against China’s increasing influence have rocked the city.

In November, Xi will go to South America for a BRICS summit in Brazil and then APEC in Chile, probably the next opportunity for him to meet US President Donald Trump.

China’s slowing economy adds tension for Xi, and more supportive measures could be rolled out before the end of 2019.

In January, self-ruled and proudly democratic Taiwan, claimed by the party as China’s sacred territory since 1949, holds presidential elections.