'This is not over': Hong Kong protesters return to the streets

Hong Kong's protests began in opposition to a bill that would have allowed extraditions to mainland China. 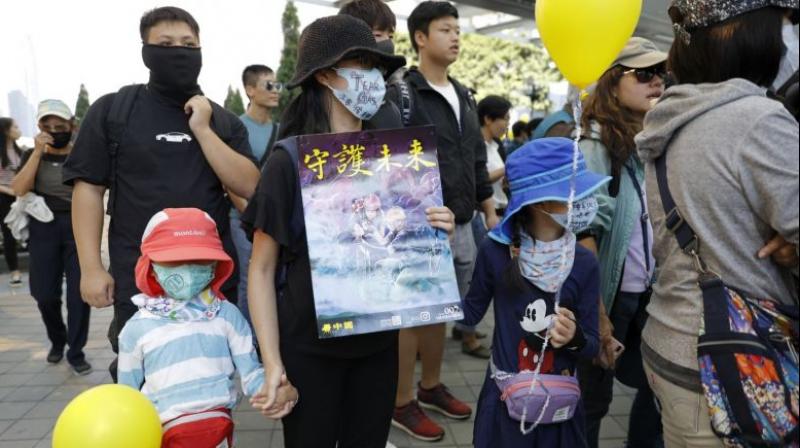 Protesters returned to the streets of Hong Kong on Sunday, ending a brief election lull and demanding the government make concessions a week after pro-democracy candidates won a landslide victory. (Photo: AP)

Hong Kong: Protesters returned to the streets of Hong Kong on Sunday, ending a brief election lull and demanding the government make concessions a week after pro-democracy candidates won a landslide victory.

Sunday's rallies follow skirmishes overnight between police and protesters, with tear gas fired for the first time since the November 24 district council vote and a man assaulted as he tried to clear a protester barricade.

Hong Kongers have rallied in huge numbers over the last six months, fuelled by years of growing fears that authoritarian China is stamping out the city's liberties.

The territory's Beijing-backed leaders have offered few concessions and police have cracked down hard on protesters in increasingly violent confrontations.

At one of Sunday's rallies -- a gathering to thank US lawmakers for their support -- protesters said they were determined to keep up the pressure on local authorities after the election victory.

"I would like to send a message to the government: we are not done and this is not over," said one 27-year-old protester, who declined to give his name.

He said he hoped that Sunday's demonstrations, all three of which received permits called "letters of no objection," would stay peaceful.

"I do worry that public opinion may change if violence and clashes continue," he said.

But echoing the views of many activists who defend the violent nature of protests, he said he feared the movement would "simply wither if we adopt a completely peaceful manner."

- Calls to keep the peace -

Elsewhere, a 13-year-old girl, who gave only her family name, Leung, joined the protest surrounded by people waving US flags and singing the American national anthem.

"I believe Hong Kong people will continue to take to the streets, otherwise the government may mistakenly believe that we have let go of our demands," she told AFP.

"I will join as often as I can, even just to make the headcount larger."

Months into the huge protests kicked off by opposition to a bill allowing extradition to China, pro-democracy demonstrators still appear to command widespread support -- with the victory of pro-democracy candidates undercutting government claims of a "silent majority" opposed to the movement.

But Beijing-backed chief executive Carrie Lam has offered no concessions in the wake of the electoral victory, which protesters say compels them to return to the streets.

"I just want to remind everyone that despite the small victory in district council election, we must not forget why we started all this and we must return to our main theme -- reclaim Hong Kong, revolution of our times; five demands, not one less," an organiser of the evening rally wrote on the Reddit-like LIHKG forum.

The anonymously penned post also urged people to "remain highly restrained" during the march, a day after protesters blocked roads in the Mong Kok neighbourhood and police fired three rounds of tear gas.

A video from the neighbourhood that emerged online also showed a protester brutally assaulting a man as he attempted to clear a barricade.

The commentator mocks the man, who stumbles and then slumps over after being hit across the head with a heavy metal object, blood trickling from a wound.

In a statement, police confirmed the incident: "So far no one has been arrested. The victim suffered a serious head injury and was sent to hospital."

"It could have killed him," Tang said.

Hong Kong's protests began in opposition to a bill that would have allowed extraditions to mainland China. After months of pressure, the bill was finally withdrawn, but the movement has now snowballed into wider calls to protect the city's freedoms.