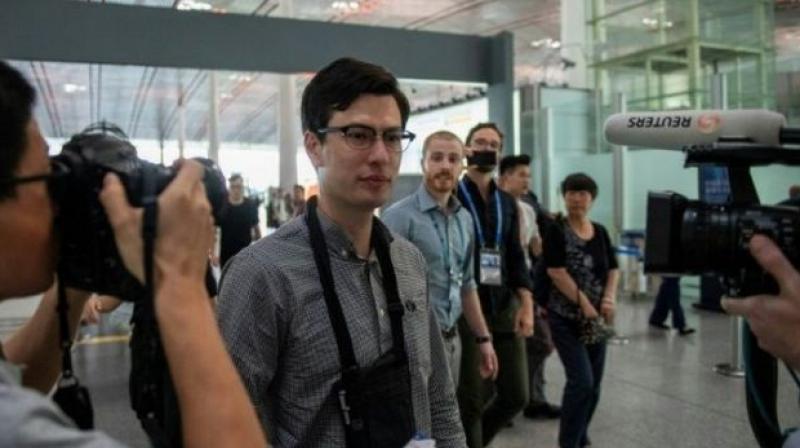 Seoul: An Australian student arrested for spying and expelled from North Korea last year said he was threatened with a firing-squad execution and told not even US President Donald Trump could save his "sorry arse".

Among the crimes Alek Sigley was accused of committing was posting a picture of a toy tank on Instagram, which his interrogators told him was military espionage. Sigley, 30, was studying modern Korean literature at Kim Il Sung University in Pyongyang when he went missing in June, sparking international alarm.

A fluent Korean-speaker, he had written articles for several publications and posted apolitical content on social media about everyday life in one of the world's most secretive nations.

He was detained at the university and taken to an interrogation facility in a Mercedes-Benz with a black plastic bag covering its licence plate.

A North Korean man "with a crazed expression and bulging, bloodshot eyes" began screaming at him, Sigley wrote in a column published by the Guardian on Wednesday. "You son of a bitch," he was told in an expletive-laden rant.

"Coming into our country and committing all these crimes. You think Trump or Pompeo will save your sorry arse?" Sigley recalled him saying.

Sigley was interrogated "in a room completely cut off from the outside world", with no sense of time as the lights were kept on permanently and there was no clock.

"Every day was spent writing forced confessions of my 'crimes', which became only more fanciful as time went on," he wrote.

If he denied the allegations, "they began yelling at me, reminding me that I could face execution by firing squad if I didn't carry out my 'reflection' and do it 'sincerely'."

One of his offences, he was told, was posting on Instagram a picture of a toy North Korean tank inscribed with the slogan "Let's exterminate US imperialists, the eternal enemy of the Korean people".

Australia has no diplomatic representation in Pyongyang and when Sigley was detained Canberra turned to Sweden, which has an embassy in North Korea and a history of acting as a diplomatic intermediary.

Stockholm sent an envoy and Sigley was released after nine days in detention -- a much shorter period than some foreigners arrested in the authoritarian North -- with Pyongyang saying he was freed on grounds of "humanitarian forbearance".

He was forced to read out a videoed "letter of apology" dictated by his captors before being released, he wrote.

Sigley was already familiar with the North, organising tours to the isolated country and marrying his Japanese wife there in 2018.

"North Korea is one of the world's most xenophobic societies," he said.

"But this xenophobia comes from the state, not the people."