Thais who have not witnessed a coronation since Bhumibol's in 1950, will see the newly-crowned monarch as he is carried through Bangkok. 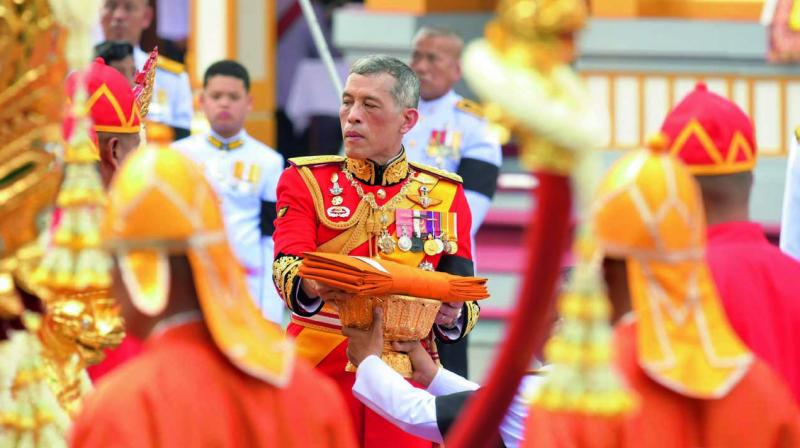 King Maha Vajiralongkorn will be crowned in a pageantry-laden ceremony. (Photo : File)

Bangkok: Thailand's King Maha Vajiralongkorn will be crowned this weekend in a pageantry-laden ceremony flecked by Hindu and Buddhist ritual, as Rama X furthers his primacy over one of the world's richest monarchies and a kingdom beset by ulcerous political divides.

The May 4-6 coronation comes more than two years after Vajiralongkorn ascended the throne at the death of his father Bhumibol Adulyadej. Bhumibol reigned over seven tumultuous decades and was revered by Thais as a symbol of unity in a politically chaotic country.

His fiercely private 66-year-old son -- Rama X of the Chakri dynasty -- is less well-known by his subjects, and makes frequent trips overseas.

On Saturday at the auspicious hour of 10:09 am, the public will be given a rare window into the heart of Thai power as blanket television coverage of the three-day coronation begins.

It will start with King Vajiralongkorn's "purification" by water drawn from ponds and rivers followed by a presentation of holy water by the top Buddhist patriarch and Chief Brahmin.

Then, as he sits underneath an ornate nine-tiered umbrella inside the Grand Palace, will be handed the diamond-encrusted Great Crown of Victory and issue his first royal command.

The rituals "are a symbolic system to upgrade the king from human to god", according to Tongthong Chandransu, a researcher of royal ceremonies.

The following day Thais, who have not witnessed a coronation since Bhumibol's in 1950, will see the newly-crowned monarch as he is carried on a palanquin for seven kilometres through Bangkok's historic heart.

"I'm excited, it's a rare event... everyone respects the monarchy, it is the spiritual anchor for Thais," Surasak Nantaket, a 20-year-old student, told AFP. The government has set aside 1 billion baht ($31 million) for the ceremony, according to the deputy prime minister.

Inscrutable and powerful, Vajiralongkorn rarely addresses the Thai public, leaving his views broadly unknown and much of his private life a mystery and subject to gossip and conjecture.

In an unexpected twist late Wednesday, the palace named his consort -- and deputy head of his security -- Suthida Vajiralongkorn na Ayudhya as his fourth wife, making her Queen Suthida. It has added to the mounting intrigue around the royal ceremony.

Thailand's monarchy is protected by one of the world's harshest royal defamation laws, making criticism or full analysis inside the kingdom all but impossible.

The Thai constitutional monarchy was established in 1932. But recent actions -- notably to extinguish a bid by his elder sister to run for premier -- have shown an increasingly assertive crown.

The kingdom has been cut by political divisions for more than 13 years, with coups and violence toppling short-lived civilian governments.

Full results from a contentious March 24 general election, the first since generals again seized power in 2014, are due to be announced on May 9.

Historically the monarchy and army have survived in partnership. The ruling junta, led by former army chief Prayut Chan-O-Cha, wants to return as a civilian government and claims legitimacy from winning the popular vote.

But deadlock looms with an anti-junta bloc claiming most parliamentary seats and the right to form a government. "The role of the crown will be key in restoring and ushering in some kind of a new normal, a new kind of political stability," said Thitinan.

Since ascending the throne, Vajiralongkorn has repeatedly left his mark on the Thai bureaucracy. Parliament has been shuttered since the palace reclaimed the land it stands on; police have been ordered to wear a short crew-cut, while the king's pointmen now sit on the influential privy council and manage his beefed-up security.

Significantly, the king transferred direct control of the Crown Property Bureau to himself, breaking the tradition of civilian stewardship of the hugely wealthy body. In the absence of public debate on those moves, a wave of royal volunteerism has surged across the country ahead of the coronation.

Millions have signed up to clean streets, plant mangroves and repaint roads across the kingdom, while vast portraits of the king now stud virtually every street.

But not everyone is captivated by the ceremony. "I'm not really interested," said one office worker, requesting anonymity, expressing concern at "changes under the new reign".