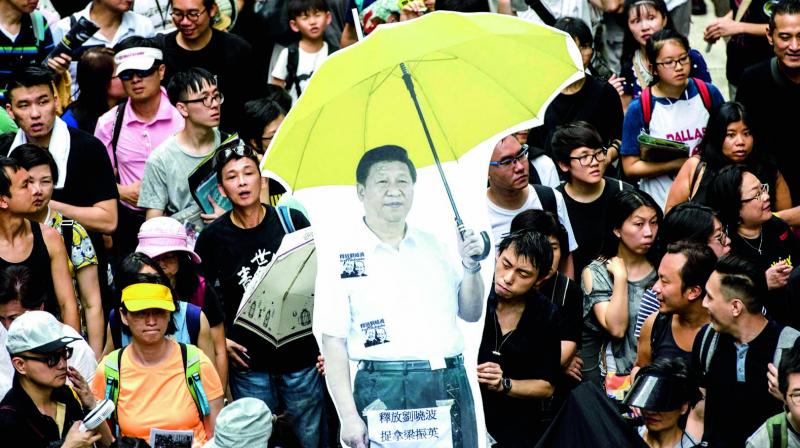 A cardboard cut-out of Chinese President Xi Jinping holding a yellow umbrella, a symbol of the 2014 ‘Umbrella Movement’, is carried during a protest march in Hong Kong on Saturday coinciding with the 20th anniversary of the city’s handover from British to the Chinese. (Photo: AFP)

Hong Kong: Chinese President Xi Jinping warned on Saturday that any challenge to Beijing’s control over Hong Kong crossed a “red line” as tens of thousands calling for more democracy marched through the city 20 years after it was handed back by Britain.

Mr Xi spoke in a televised address after swearing in new Hong Kong leader Carrie Lam. A huge security operation shut down large parts of Hong Kong for Mr Xi’s three-day visit reflecting Beijing’s concern that there should be no embarrassment ahead of a key Communist Party congress later this year which is expected to cement his position as the most powerful Chinese leader in a generation.

Mr Xi said that any threat to China’s sovereignty and security or to the power of the central government “crosses the red line and is absolutely impermissible”.  The President also warned against anyone endangering Hong Kong’s Constitution or using the city “to carry out infiltration and sabotage activities against the mainland”.

The message comes as young activists have emerged calling for self-determination or even full independence for Hong Kong, which has infuriated Beijing. Just hours after Mr Xi left the city on Saturday afternoon, organisers estimated 60,000 people marched from Victoria Park to government offices in central Hong Kong in an annual pro-democracy protest. Protesters also called for the release of cancer-stricken Chinese dissident Liu Xiaobo, who was given medical parole earlier this week but remains on the mainland.

“Suppression by the regime has never let up and I don’t see any end in sight,” said activist Nathan Law, Hong Kong’s youngest legislator, who was arrested on Wednesday over an anti-China sit-in and attended the protest after being released on Friday.