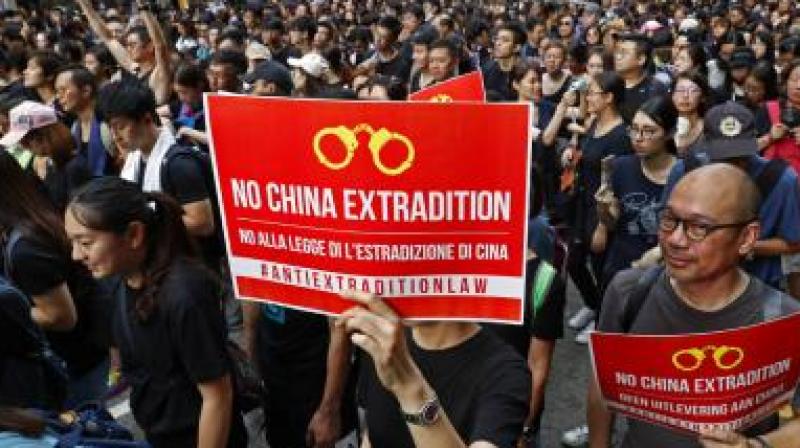 Opponents of the extradition bill, which would allow people to be sent to mainland China for trial in courts controlled by the Communist Party, fear it is a threat to Hong Kong's much-cherished rule of law. (Photo: AP)

Shanghai: A Chinese state paper on Tuesday called for "zero tolerance" after protestors in Hong Kong stormed and ransacked the city's legislature following a day of protests against a controversial extradition bill.

Tensions over the weeks-long movement against the bill escalated on Monday, and Hong Kong police fired tear gas early on Tuesday to disperse hundreds of defiant protesters who had occupied the city's legislature on the anniversary of Hong Kong's 1997 return to Chinese rule.

"Out of blind arrogance and rage, protestors showed a complete disregard for law and order," the Global Times, published by the ruling Communist Party's People's Daily, said in an editorial.

"Chinese society is all too aware that a zero-tolerance policy is the only remedy for such destructive behaviour witnessed. Otherwise, and without this policy, it would be similar to opening a Pandora's Box," it said.

Opponents of the extradition bill, which would allow people to be sent to mainland China for trial in courts controlled by the Communist Party, fear it is a threat to Hong Kong's much-cherished rule of law.

In a separate editorial, the state-run China Daily reiterated the principle of "one country, two systems" in Hong Kong -- a formula that allows freedoms not enjoyed in mainland China -- saying the former British colony is an "inalienable" part of the China, and that Hong Kong affairs concern China.

"The only way for the Special Administrative Region to sustain economic growth and maintain stability is for it to further integrate its own development into the nation's overall development," the newspaper said.