After India calls off standoff at Doklam, Modi, Xi face-to-face at BRICS summit

China has also said BRICS was not an appropriate forum for India to raise the counter-terrorism record of Pakistan, its 'all weather' ally. 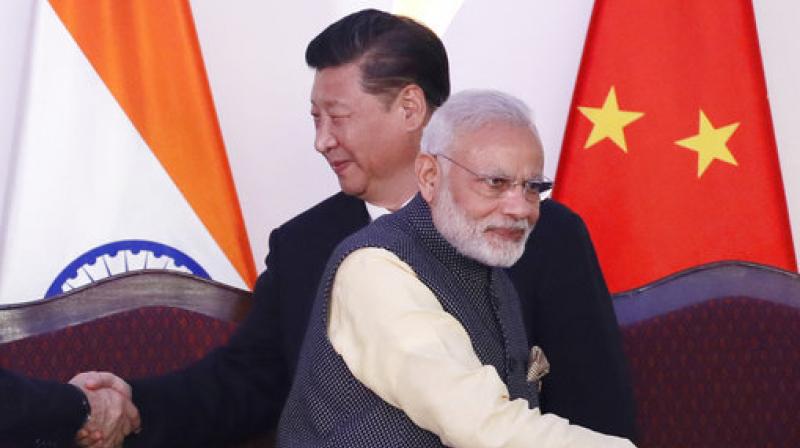 Xiamen (China): Prime Minister Narendra Modi will arrive in Xiamen on Sunday for the BRICS Summit, where he is likely to meet Chinese President Xi Jinping, days after the two countries ended their 73-day standoff in the Doklam area.

The three-day summit in Xiamen, a South-eastern Chinese city in Fujian province, will begin on Sunday even as authorities declared a high alert with Typhoon Mawar expected to hit the coastal region.

The summit will be the first gathering when the leaders of Brazil, Russia, India, China and South Africa will meet after New Delhi and Beijing decided on "expeditious disengagement" of their border troops in the disputed Doklam area on August 28.

It is likely to provide Modi and Xi their first face-to-face opportunity to discuss the standoff, which had started on June 16 after the Chinese military tried to build a road India feared would allow Beijing to cut off its access to North-eastern states.

India and China have not ruled out a Modi-Xi meeting during the summit. India's External Affairs Ministry has said it was a common practice to arrange bilateral meetings on the margins of such multilaterals, while the Chinese Foreign Ministry has said it will make arrangements "if time allows".

Ahead of the summit, China has also said BRICS was not an appropriate forum for India to raise the counter-terrorism record of Pakistan, its "all weather" ally.

While External Affairs Ministry Spokesman Raveesh Kumar on Friday refused to "preempt" as to what Modi will speak during his intervention at the Summit on Monday, sources said India is expected to flag concerns over terrorism strongly.

At the BRICS Summit hosted by India in 2016, Modi had described Pakistan as a "mothership" of terrorism worldwide and sought decisive global action against terror outfits. The summit was also expected to discuss the course of the BRICS grouping of emerging economies for the next 10 years as it has completed its first decade in existence.

The Xiamen city, which is geographically close to Taiwan and separated by a narrow strip of Taiwan Straits, has been decked up for the high-profile summit. China has projected high expectations from the Xiamen summit, which will be attended by Russian President Vladimir Putin, South Africa's Jacob Zuma and Brazil's Michel Temer.

The BRICS nations are key players in the world economy and in global governance. Together, the five accounted for 23 per cent of the 2016 global economy, almost double their share in 2006.

They contributed more than half of world economic growth in the past 10 years, becoming the strongest engines of the global economy. BRICS countries account for 44 per cent of world population and have abundant natural and human resources.

In a commentary, China's state-run Xinhua news agency said these BRICS countries have shown no fear of the lacklustre world economy but demonstrated to the world what they can achieve more by staying united.

Established in 2006, the economic bloc has been making steady progress since as its five members have been cementing cooperation, building trust and seeking mutual benefits.

"Although the mechanism has seen ups and downs over the past years and each member faces its own set of challenges, they are like five fingers: short and long when extended, but a powerful fist when clenched together," the commentary said.

China has invited leaders from five other emerging markets - Egypt, Guinea, Mexico, Tajikistan an Thailand – to the summit under its "BRICS Plus" concept.

Chinese Foreign Minister Wang Yi said the five countries were not permanent invitees but they will participate only in 2017.

He compared their presence to India's invitation to BIMSTEC (Bay of Bengal Initiative for Multi Sectoral Technical and Economic) leaders for 2016's Goa summit.