China expressed firm opposition to US warship sailing near islands and reefs claimed by it in South China Sea. 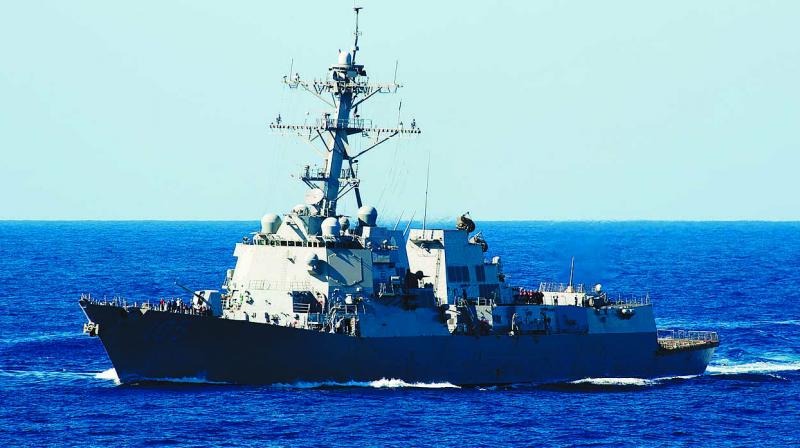 An official US statement described the move by the Chinese destroyer as 'unsafe' because it moved within 41 metres of the US warship. (Representational Image)

Beijing: The US has accused a Chinese naval ship of conducting "unsafe and unprofessional" manoeuvres when one of its warships entered the waters of the disputed South China Sea. China on Tuesday expressed its strong dissatisfaction and firm opposition to the US warship sailing near the islands and reefs claimed by it in the South China Sea (SCS).

"On September 30, without permission of the Chinese government, the US destroyer Decatur entered neighbouring waters of islands and reefs of China's Nansha Islands," Chinese Foreign Ministry spokesperson Hua Chunying said in a statement on Tuesday.

The Chinese naval ship identified the US vessel, warned and expelled it, Hua said, stressing that China has indisputable sovereignty of the Nansha islands (Spratly Islands) and its adjacent waters.

An official US statement described the move by the Chinese destroyer as "unsafe" because it moved within 41 metres of the US warship.

US Pacific Fleet deputy spokesman Nate Christensen said the Chinese destroyer had "approached USS Decatur in an unsafe and unprofessional manoeuvre in the vicinity of Gaven Reef in the South China Sea".

"The PRC destroyer conducted a series of increasingly aggressive manoeuvres accompanied by warnings for Decatur to depart the area," the Hong Kong-based South China Morning Post quoted Christensen as saying.

After the Chinese ship came within 45 yards (41 metres) of Decatur's bow it moved to prevent a collision, the report said.

Vietnam, the Philippines, Malaysia, Brunei and Taiwan have counterclaims over the vital transit route for world trade.

The US has been sending periodic air and naval expeditions to assert its right of the freedom of the navigation in the SCS. The movement of the US naval ships and aircraft through the area has increased since President Donald Trump took the office. China routinely objects the US presence to register its claims.

Hua said that with joint efforts of China and the members of Association of Southeast Asian Nations (ASEAN), the current situation in the SCS has continued to stabilise and get better, while repeated provocative US moves under the pretext of the so-called "freedom of navigation operation" have threatened the peace and stability in the region.

She said that such US moves are against the common will of countries in the region and the basic international norms, the state-run Xinhua news agency reported on Tuesday.

"The Chinese side strongly urges the US side to immediately correct its mistakes and stop such provocative operations," Hua said, adding that China would take all necessary measures to safeguard its national sovereignty and security.

The unsafe and aggressive manoeuvres by the US and Chinese ships took place amid the trade war between the world's two largest economies. Both the countries have been slapping tariffs on billions of dollars' worth of their exports.

The Chinese military too voiced its opposition to the US ship sailing through the area. A Chinese navy vessel carried out identification and verification procedures of the USS Decatur in accordance with law and warned it, Wu Qian, spokesperson with the Ministry of National Defence said in a statement.

"The Chinese military will fulfil its defence duty and continue to take all necessary measures to firmly safeguard the sovereignty and security of the country, as well as the regional peace and stability," he said.