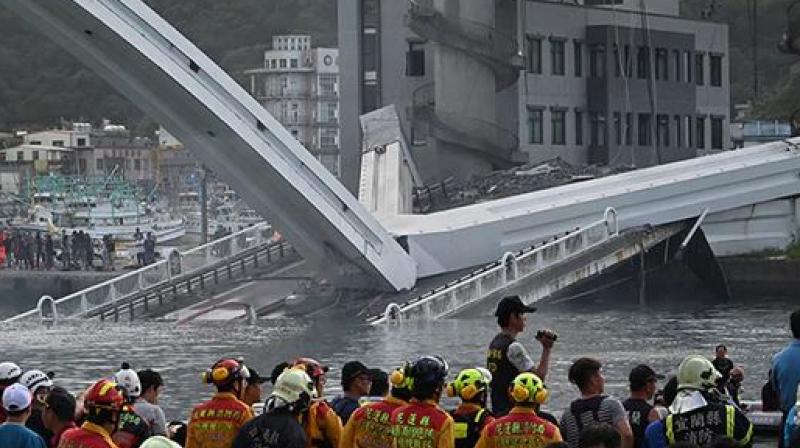 In the video, the road gave way and tumbled down onto at least three fishing boats as a petrol tanker that was crossing also plunged into the water early on Tuesday morning. (Photo: AFP)

Taipei: Hopes were fading late Tuesday for six missing people believed to be trapped when a bridge in Taiwan collapsed onto a group of fishing boats moored underneath.

In the video, the road gave way and tumbled down onto at least three fishing boats as a petrol tanker that was crossing also plunged into the water early on Tuesday morning.

At least 12 people were injured, including six Filipino and three Indonesian fishing workers, the Taiwanese driver of the petrol tanker, and two coastguard personnel, according to Taiwan's National Fire Agency.

Officials launched a rescue operation after the collapse and were later informed six foreign workers were unaccounted for and might be trapped in the boats underneath the collapsed structure.

One badly damaged boat was pulled out from under the structure on Tuesday afternoon, but two more remained stuck with the tide rising.

"It's been a long time since it happened and even if the workers survived the impact of the collapse, the air might not last this long," a local official who spoke on condition of anonymity told AFP.

"This is a complicated rescue operation. We were in consultation with structural and building experts as well as ship-building experts, and therefore it has taken us longer. We are doing our best," he said.

The petrol tanker burst into flames at some point after it hit the water, sending a thick plume of black smoke into the air.

It is not immediately clear what caused the bridge -- which was completed in 1998 and spanned a small fishing port -- to collapse.

Taiwan was skirted by a typhoon on Monday night, which brought heavy rains and strong winds to parts of the east coast.

But at the time of the bridge collapse, the weather was fine.

Taiwan has a huge fishing industry and many of those who work on its boats are low-paid migrant workers from countries such as the Philippines, Indonesia and Vietnam.

Prosecutors have launched an investigation into the cause of the incident, said transport minister Lin Chia-lung, adding that the bridge was still within its expected 50-year lifespan.

"Recent weather conditions, earthquakes and past assessments of the bridge will be taken into considerations. We will fully cooperate with the investigation," he told reporters.

Previous serious bridge incidents in Taiwan have mostly been related to typhoons.

In 2009, two bridges were badly damaged by Typhoon Morakot, which left more than 400 people dead.

Taiwan, which lies near the junction of two tectonic plates, is also frequently jolted by earthquakes.

The island's worst tremor in recent decades was a 7.6-magnitude quake in 1999 that killed around 2,400 people and destroyed tens of thousands of buildings.

Although the devastating quake had ushered in stricter safety codes, several fatal incidents in recent years have triggered probes into shoddy construction.

In 2018, a developer, an architect and a civil engineer were indicted over the partial collapse of a building that killed 14 people during an earthquake earlier that year.

It followed a similar incident in 2016 when another quake killed 117 people -- most in a single apartment block that collapsed.