Hours after the attack, the Pakistani Taliban sent video footage shot during the assault to journalists. 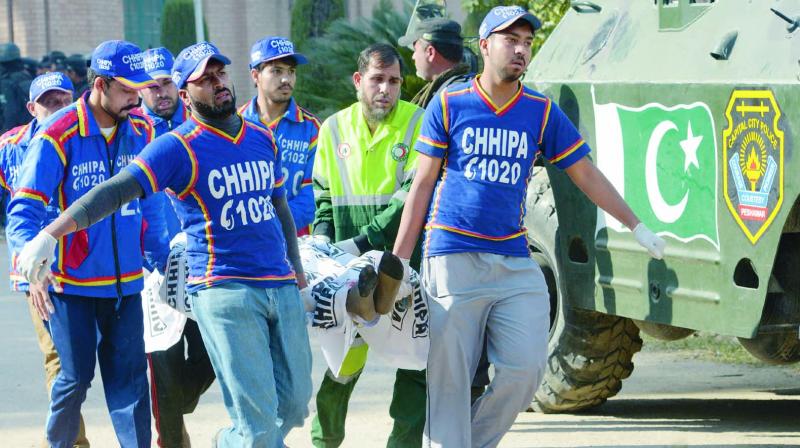 Pakistani volunteers move the body of a student from an Agriculture Training Institute after an attack by Taliban militants in Peshawar. (Photo: AFP)

Peshawar: Twelve people were killed and dozens injured Friday when burqa-clad Taliban militants stormed a training institute in the northwestern city of Peshawar as Pakistan marked the birthday of the Prophet Mohammed, officials said.

Police said that at least three militants opened fire at security near the gates of the Agriculture Training Institute, killing one guard and injuring another before making their way inside and targeting the student accommodation.

Authorities said the gunmen had been killed and security forces had cleared the area after searching for remaining militants. Blood smeared the corridor of the dormitory where the gunmen fired at cornered students and lobbed hand grenades, with several victims said to be teenagers, according to an AFP reporter at the scene.

“Some students got out to watch the gun-battle and they were shot by the militants,” student Zahid Ullah, 16, told AFP.

Police said six students, a security guard and two civilians were killed in the attack by the militants.

“All of them were wearing suicide vests but they were killed before they could blow themselves up,” said Salahuddin Khan Mehsud, police chief of Khyber Pakhtunkhwa province.

“All three terrorists are dead while we are trying to identify a fourth body,” he added, following earlier reports there had been an additional gunmen.

Spokeswomen from two hospitals in the city said they had received a total of 12 bodies and were treating some 38 injured, including several in critical condition.

During the onslaught on the training centre, a spokesman for the Tehreek-e-Taliban Pakistan, Muhammad Khurasani, claimed responsibility for the attack in a telephone call to AFP.

“Our mujahids have attacked the building because it was used as office for ISI, God willing our fighters will fight till the last drop of blood,” he said, referring to Pakistan’s Inter Services Intelligence agency. Hours after the attack, the Pakistani Taliban sent video footage shot during the assault to journalists.

In the two-minute video, Taliban gunmen in white shalwar kameez (traditional Pakistani dress) are seen storming the building and shouting “Allahu akbar” (“God is greatest”) as they walk through a corridor.

“Is this the ISI office?” one of them asks as they enter a room and start shooting, at which point the video ends.

A photograph of the attackers sitting with their leader Mullah Fazlullah was also sent to the media along with the video clip.

Noor Wali, a 19-year-old student at the institute, described a terrifying ordeal that began when he was woken by gunshots.

“I rushed to the door and saw a fountain of blood pumping out of the shoulder of my roommate who was standing outside the room,” he told AFP.

He and another student rushed to his aid, and hid from the gunmen for almost an hour before they were rescued by security forces.

“The other student was pressing the wound with his hands to stop the blood and I had to put my hand on his mouth so that he cannot scream,” he said.

“We took shelter inside the bedroom and were begging the injured student not to make any sound as the terrorists might hear it and kill us.”