Many Rohingyas ended up in Muslim-majority Malaysia and Indonesia because Thailand stuck to a policy of not accepting the vessels. 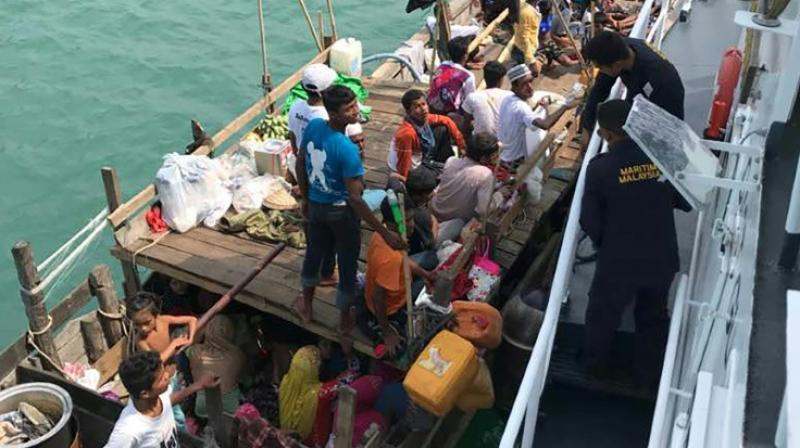 The vessel carrying 56 people was intercepted by Malaysian maritime authorities near the northwestern island of Langkawi (Photo: AFP)

Kuala Lumpur: A boat carrying dozens of Rohingyas from Myanmar arrived in Malaysia on Tuesday and the members of the stateless Muslim minority will be allowed to enter the country, authorities said.

Its arrival came as fears grow about conditions in overcrowded camps for the minority fleeing violence in Myanmar. Nearly 700,000 Rohingyas have sought shelter in southern Bangladesh since Myanmar launched a brutal crackdown August 2017.

"All 56 passengers, mostly children and women, are safe but tired and hungry," said the navy chief. "The boat and its passengers will be handed over... to the immigration authorities."

The navy and coastguard had stepped up patrols in the area after the boat briefly stopped on an island off Thailand's western coast Sunday, and the passengers said they were en route to Malaysia.

Rohingya migrants trying to travel south by boat have been rare since Thai authorities clamped down on regional trafficking networks in 2015, leaving thousands of migrants abandoned in open waters or jungle camps.

Rohingya refugees fleeing to Bangladesh have arrived to find cramped settlements and often squalid conditions in the Cox's Bazar district. Hundreds of thousands of Rohingya who fled previous waves of persecution are already living in the district.

An agreement to repatriate Rohingya from Bangladesh to Myanmar's Rakhine state has yet to see a single refugee returned.

Many of the Rohingyas ensnared in the 2015 boat crisis ended up in Muslim-majority Malaysia and Indonesia because Thailand stuck to a policy of not accepting the vessels.

There are nearly 70,000 Rohingya refugees and asylum-seekers living in Malaysia, according to the most recent statistics from the UN refugee agency.