World   Asia  03 Jul 2018  Could take weeks or even months to get boys out of Thai cave, say experts
World, Asia

Could take weeks or even months to get boys out of Thai cave, say experts

Food and medical supply has been sent to the boys and divers are now preparing to lay phone lines through the cave to set up phone calls. 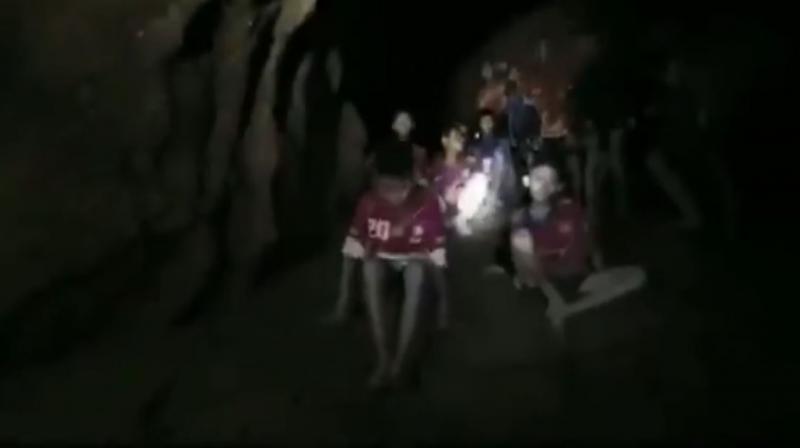 They appeared exhausted, rake thin, sensitive to the light but lucid, with some speaking faltering English to try to communicate with the unidentified diver. (Photo: Screengrab/AFP)

Mae Sai: Food and medical help reached 13 members of a Thai youth football team found rake thin but alive, huddled on a ledge deep inside a flooded cave nine days after they went missing, as the focus turned Tuesday to how to get them out.

The Thai military said it is providing months' worth of food and diving lessons to the boys, discovered kilometres into the pitch-black and waterlogged Tham Luang network of caves in the country's monsoon-drenched north.

"(We will) prepare to send additional food to be sustained for at least four months and train all 13 to dive while continuing to drain the water," Navy Captain Anand Surawan said. He refused to say how long they might be trapped.

Officials also added that diving teams are now preparing to lay telephone lines through the flooded Thai cave to set up phone calls to the trapped boys and their football coach.

"How many are you?...thirteen... brilliant," shouts a British diver, in an astonishing exchange captured in a video of the moment help finally reached the youngsters.

The incredible footage showed the emaciated boys in baggy mud-slicked football jerseys, shielding their eyes from the divers' torches.

Much-needed food and medical supplies, including high-calorie gels and paracetamol, reached them Tuesday as rescuers prepared for a prolonged extraction operation, with several chambers still submerged.

"(We will) prepare to send additional food to be sustained for at least four months and train all 13 to dive while continuing to drain the water," Navy Captain Anand Surawan said, according to a statement from Thailand's Armed Forces.

The astonishing rescue sparked jubilation across the country after the country mounted a massive and gruelling operation beset by heavy downpours and fast-moving floodwaters.

"We called this 'mission impossible' because it rained every day... but with our determination and equipment we fought nature," Chiang Rai governor Narongsak Osottanakorn said Tuesday.

The boys were discovered at about 10:00 pm Monday by British divers some 400 meters (1,300 feet) from where they were believed to be stranded several kilometers inside the cave.

In the video, posted on the Thai Navy SEAL Facebook page, one of the boys shouts to the rescuers: "we are hungry.. shall we go outside?"

In response the British diver says: "No, no not today... many, many people are coming... we are the first," in reference to the vast and complex rescue operation that has taken over the mountainside.

The harrowing task of getting the boys out is complicated by the fact that they are in a weak state and are not experienced divers.

Experts said it could take weeks -- if not months -- to get them out with much of the cave still submerged by floods.

If diving proves impossible, there is a outside chance they can be drilled out or wait for waters to recede and walk out on foot.

But the clock is ticking with heavy rains forecast to return this week as the monsoon season bites deeper.

The priority is to get the team's strength up before they start the tricky journey out, officials said, reluctant to offer a concrete timeline.

Relatives, and much of Thailand, exploded with relief and jubilation on getting the news the team were alive and safe.

"It's unimaginable. I've been waiting for 10 days, I never imagined this day would come," the father of one of the boys said.

Rescuers found their bicycles, football boots and backpack near the cave's opening, and spotted handprints and footprint further in -- leading them to the spot they were eventually found.

Watch the video released by the Royal Thai Navy of the moments following their discovery: