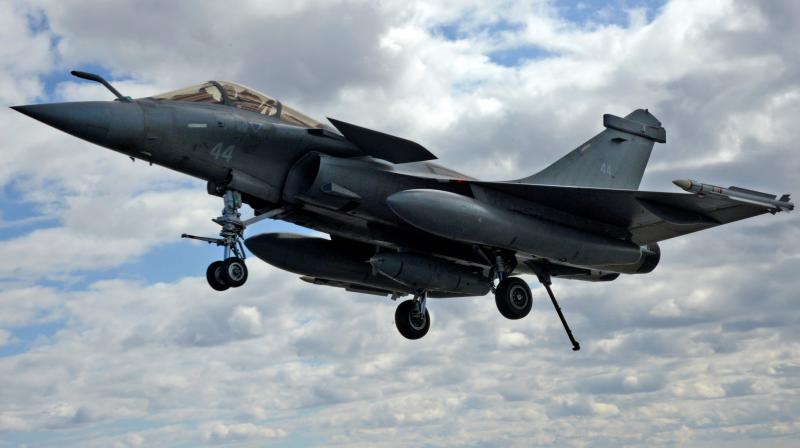 New Delhi: The BJP alleged on Saturday that Rahul Gandhi is acting as an agent of rival defence companies and being used as a "pawn", and also claimed he and the Congress keep raking up allegations of corruption in the Rafale deal in an attempt to "weaken" India.

At a press conference, BJP spokesperson Sambit Patra also played down the appointment of a judge in France to lead a judicial investigation into the alleged corruption and favouritism in the Rs 59,000 crore deal, saying the development was outcome of a complaint by an NGO and should not be seen as a matter of corruption.

This is akin to a competent authority in India writing down in a file that "please act accordingly" when a matter is brought before him, Patra said and accused the Congress of spreading lies and misconceptions over the issue.

The Congress has become synonymous with spreading lies and misconceptions, he said.

"The way Rahul Gandhi is behaving, it will not be an exaggeration to say that he is being used as a pawn by competing companies. He has been lying right from the beginning on the issue. Probably, he is acting as an agent or some member of Gandhi family has been for a competing company," Patra alleged.

Patra alleged that as the Gandhi family had received no commission in the Rafale deal, its party had been levelling these allegations.

The Congress has demanded a Joint Parliamentary Committee probe into the Rafale deal, saying it is the only way forward to find the truth about "corruption" in the purchase of the fighter jets.

The Congress' demand came after French investigative website Mediapart reported that a French judge has been appointed to lead a "highly sensitive" judicial investigation into alleged "corruption and favouritism" in the Rs 59,000 crore Rafale fighter jet deal with India.

Patra cited a Comptroller and Auditor General (CAG) report and a Supreme Court (SC) verdict, both of which had found nothing wrong in the defence deal between the Indian and French governments, to reject allegations of the Congress.

The government won a judicial verdict as well as an electoral verdict, he said in reference to the 2019 Lok Sabha polls in which the BJP notched up a massive victory with the Congress making the alleged corruption in the Rafale deal as a key plank of its campaign against the Modi government.

The BJP spokesperson noted that the Supreme Court had in its verdict in November 2019 said that there can't be a roving and fishing enquiry pertaining to the Rafale allegations, and accused Gandhi of going on another "fishing expedition" with his party attacking the government.

The SC had made these remarks while rejecting a plea to review its December 2018 decision to reject a plea for a court-monitored probe into the purchase of 36 Rafale fighter aircraft.

He also cited a number of allegations levelled by Gandhi, including his attributions to former French president Francois Hollande and incumbent Emmanuel Macron to back his charge of corruption against the Modi government, and noted that both French leaders had immediately denied making such comments.

Gandhi also had to tender an apology to the Supreme Court for wrongly claiming that the top court has agreed that "chowkidar chor hai" (watchman is thief), a pet slogan of the Congress leader against Prime Minister Narendra Modi in the run up to the 2019 polls.

A French judge has been appointed to lead a "highly sensitive" judicial investigation into alleged "corruption and favouritism" in the Rs 59,000 crore Rafale fighter jet deal with India, French investigative website Mediapart reported.

"Corruption in the Rafale deal has come out clearly now. The stand of the Congress party and Rahul Gandhi has been vindicated today after the French government has ordered a probe," he told reporters at a press conference.

However, there was no immediate reaction from the Indian government or the BJP.

The Mediapart said the probe into the inter-governmental deal signed in 2016 was formally opened on June 14.

"A judicial probe into suspected corruption has been opened in France over the 7.8-billion-euro sale to India in 2016 of 36 Dassault-built Rafale fighter aircraft," the Mediapart reported on the latest development on the controversial deal.

It said the investigation has been initiated by the national financial prosecutors' office (PNF).

The judicial investigation has been ordered by France's national financial prosecutors' office, following Mediapart's fresh reports in April of alleged wrongdoings in the deal as well as a complaint filed by French NGO Sherpa that specialises in financial crime.

"The highly sensitive probe into the inter-governmental deal signed off in 2016 was formally opened on June 14th," the media report said.

Mediapart journalist Yann Philippin, who filed a series of reports on the deal, said a first complaint was "buried" in 2019 by a former PNF chief.

"The judicial investigation was finally opened following the revelations of the investigation #RafalePapers of @mediapart and a new complaint from @Asso_Sherpa. A 1st complaint was buried in 2019 by the former PNF boss, Eliane Houlette," he tweeted.

In April, Mediapart, citing an investigation by the country's anti-corruption agency, reported that Dassault Aviation had paid about one million Euros to an Indian middleman.

Dassault Aviation has rejected the allegations of corruption, saying no violations were reported in the frame of the contract.

The Congress accused the government of massive irregularities in the deal, alleging that it was procuring each aircraft at a cost of over Rs 1,670 crore as against Rs 526 crore finalised by the UPA government during the negotiations for the MMRCA.

Prior to the Lok Sabha elections in 2019, the Congress raised several questions about the deal and alleged corruption but the government rejected all the charges.