Organisers of the protest estimated the turnout to be around 40,000 while police put the figure at 13,000. 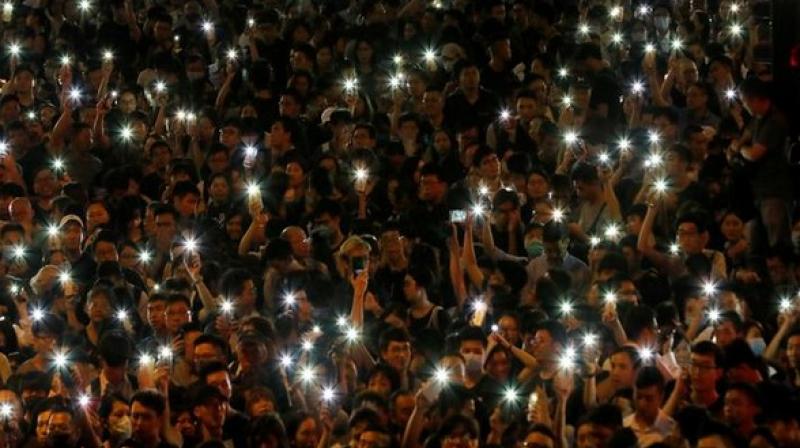 Thousands of civil servants on Friday gathered in Hong Kong's central district to demonstrate support for the anti-government protests that have gripped the semi-autonomous Chinese territory from the past few weeks. (Photo: ANI)

Hong Kong: Thousands of civil servants on Friday gathered in Hong Kong's central district to demonstrate support for the anti-government protests that have gripped the semi-autonomous Chinese territory from the past few weeks.

The protestors demanded the complete withdrawal of the extradition bill, and called for an independent inquiry into the police handling of the protests, reported NHK world.

Organisers of the protest estimated the turnout to be around 40,000 while police put the figure at 13,000.

"In the past few weeks, there have been many conflicts between Hong Kong citizens and the police, and the government still refuses to reply to the public demands," Al Jazeera quoted co-organiser of the protest, Chan, as saying.

"After work, we are just ordinary citizens. We are just Hong Kong people and we should have the right protected by the basic law to speak freely to participate in any demonstration."

The civil servants defied the warning issued by Hong Kong Chief Executive Carrie Lam to not undermine their "principle of political neutrality".

"Any acts to undermine the principle of political neutrality of the civil service are totally unacceptable to the government as this will damage the public's confidence ... and give a wrong impression to the public that civil servants are unable to discharge their duties in an impartial manner," the statement read.

Hong Kong has seen eight consecutive weeks of anti-government protests that began against a now-suspended extradition bill, that have since broadened to include calls for democracy and police accountability.

The said extradition bill was proposed on April 3 and its opposers argue that its controversial amendments will leave anyone on Hong Kong soil vulnerable to being grabbed by the Chinese authorities for political reasons or inadvertent business offenses.

Multiple protests sometimes violent continue to take place in the semi-autonomous state despite the city's pro-Beijing leader Carrie Lam publicly apologizing for proposing the controversial legislation and announcing later that the bill was "dead".