The United Nations in Myanmar had called for release of the imprisoned journalists. 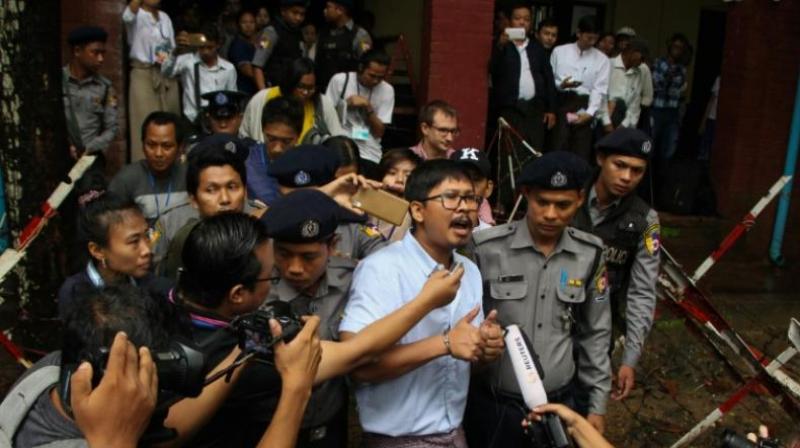 Detained journalist Wa Lone speaks to the media after exiting the court on July 9, 2018. (Photo: AFP)

Yangon: A Myanmar judge on Monday found two Reuters journalists guilty of breaching a law on state secrets and sentenced them to seven years in prison, in a landmark case seen as a test of progress toward democracy in the Southeast Asian country.

“The defendants...have breached Official Secrets Act section 3.1.c, and are sentenced to seven years. The time already served by the defendants from December 12 will be taken into consideration,” the judge said.

The reporters had told the court two police officials handed them papers at a north Yangon restaurant moments before other officers arrested them on December 12, 2017, in what one police witness testified was a set-up to entrap the journalists.

"It is found that the culprits intended to harm the interests of the state. And so they have been found guilty under the state secrets act," Judge Ye Lwin told the packed Yangon court.

“I have no fear,” Wa Lone, one of the two journalists, said after the verdict. “I have not done anything wrong....I believe in justice, democracy and freedom.”

The verdict means Wa Lone and Kyaw Soe Oo - who both have young daughters and have not seen their families outside of prison visits and court hearings for nearly nine months - remain behind bars. Kyaw Soe Oo has a three-year-old daughter and Wa Lone’s wife, Pan Ei Mon, gave birth to their first child last month.

Reuters Editor-in-Chief Stephen J Adler has condemned the conviction, and said that the verdict "must be corrected by the Myanmar government as a matter of urgency". He called it "a sad day for Myanmar, Reuters journalists Wa Lone and Kyaw Soe Oo, and the press everywhere".

"This is a major step backward in Myanmar's transition to democracy, cannot be squared with the rule of law or freedom of speech,"he said.

News agency, AFP reported that the United Nations in Myanmar had called for release of the imprisoned journalists.

On Saturday, more than 100 journalists and activists had marched through Yangon in support of the reporters, whose trial echoes the treatment of government critics during the long years of military rule in Myanmar.

The case has sparked an outcry among the international community too as an attempt to muzzle reporting on last year's crackdown by Myanmar's security forces on the Muslim Rohingya minority in Rakhine state.

The army has published its version of events at Inn Din village, conceding the Rohingya men were killed while in custody but saying it was a one-off act of abuse by a mix of security forces and ethnic Rakhine locals.

The verdict comes amid building pressure on the administration of Nobel laureate Aung San Suu Kyi over a security crackdown sparked by militant attacks in August 2017.