The coronation ceremony for King Maha Vajiralongkorn, Rama X of Thailand, began in an elaborate show of pageantry. 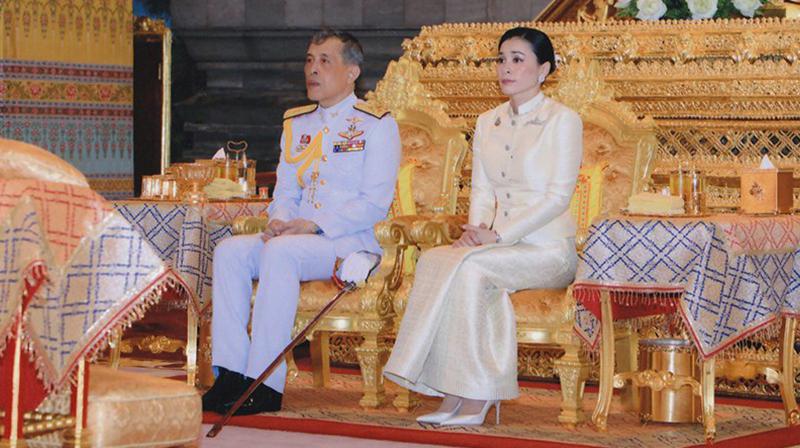 King Vajiralongkorn is known as Rama X of the Chakri dynasty, which has reigned since 1782. (Photo:AP)

Bangkok: The coronation ceremony for King Maha Vajiralongkorn, Rama X of Thailand, began Saturday in an elaborate show of pageantry, marked by Hindu and Buddhist ritual, two years after ascending the throne following his father's death.

Starting at the auspicious time of 10:09 am (0309 GMT) the public was granted a rare window into the cloistered halls of Thai power as the key rituals of the three-day coronation began.

King Vajiralongkorn is known as Rama X of the Chakri dynasty, which has reigned since 1782.

Saturday's sombre ceremony began with the white-gowned king -- the folds of his robe leaving one shoulder bared -- anointing himself with sacred water from across Thailand, wiping it gently across his face at a shrine inside the Grand Palace complex.

A canon-salute marked the moment as horns and pipes played and Buddhist monks chanted.

Hindu Brahmins were also in attendance at the syncretic ceremony, which symbolises Rama X's transformation from a human to divine figure.

He will later take his seat under the nine-tiered umbrella of state where he will be handed the Great Crown of Victory, a tiered gold 7.3-kilogram headpiece topped by a diamond from India.

For most Thais, it will be the first time they have witnessed a coronation -- the last was in 1950 for the king's beloved father Bhumibol Adulyadej.

"I'm excited and glad to have a chance to be a part of this... I'm here today to capture people's emotions," said Jakarin Kerdchok, 16, a volunteer student taking photos of waiting officials in the palace district before the event started on Saturday morning.

Curious tourists were among the hundreds of white-uniformed officers lining the streets, with an occasional smattering of civilian supporters in yellow shirts waiting patiently in the shade.

Bhumibol was seen as a figure of unity in the politically chaotic kingdom until his death in October 2016.

His son Vajiralongkorn, 66, is less well-known to the Thai public.

Fiercely private and four times married, he has inherited one of the world's richest monarchies and a kingdom submerged by political crisis.

Thailand has been run by an arch-royalist junta since 2014.

Rama X is widely seen as an adroit player of Thailand's treacherous politics, intervening several times -- including just the March 24 election -- during his short reign.

Late Friday, he arrived at a hall in the Grand Palace in his favoured cream Rolls-Royce along with his new wife -- now Queen Suthida -- a former flight attendant turned royal bodyguard.

Their marriage was unexpectedly announced on Wednesday.

Inside, he warmly greeted family members, including his 14-year-old son from his third marriage -- Prince Dipangkorn -- and his elder sister Ubolratana.

She stunned Thailand in February when her name was forwarded as a candidate for premier by an anti-junta party -- a move swiftly shot down by her brother the king in a rare royal command.

Thailand's normally hyperactive social media has been subdued in the days leading up to the coronation.

But enthusiasm bubbled on the streets around the Grand Palace where hundreds bedded down for the night on Friday to get a prime spot for the weekend's royal event.

"I'm happy to have a king as a pillar of the country," said Chomphu Phueakbamrung, 51, who had waited for hours on Friday to see the king's convoy.

Born on July 28, 1952, the British-schooled Vajiralongkorn is known for his love of cycling and piloting jets, but he spends much of his time overseas -- mainly in Germany -- and remains something of a mystery to many Thais.