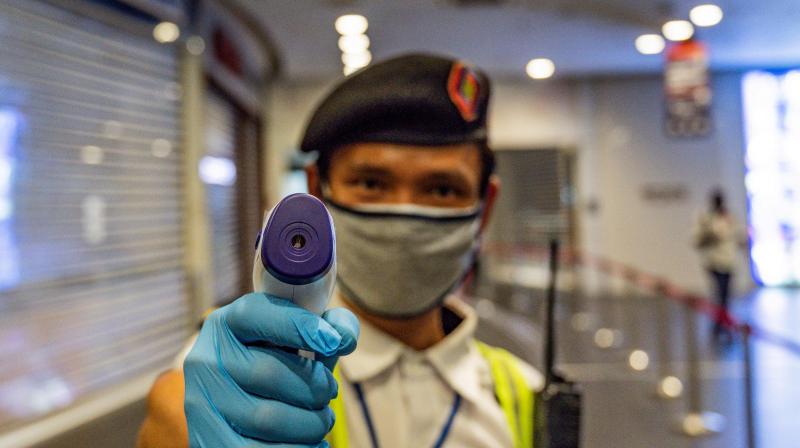 A security guard checks the temperature of a shopper before allowing entry into a shopping mall. (AFP)

Seoul: At a glitzy Chanel boutique in downtown Seoul, Kim Soo-yeon joined dozens of others in festive shorts and flare dresses, her eyes out for a clutch purse she had coveted for weeks during the coronavirus pandemic.

One floor down in the Lotte Department Store, long lines of shoppers thronged bakeries and a health-supplement store while staff restocked shelves with freshly baked cakes.

“I’m out shopping for the first time since the Lunar New Year holiday” in January, said 29-year old Kim, showing off the clutch she bought for just over 1 million won ($820), as she hastily put on a face mask to talk to a reporter. “It’s so warm and so good to be out finally.”

From malls in Seoul to jammed expressways leaving the capital to South Korea’s southern vacation island of Jeju, shoppers and travellers crowded malls and beaches on the first long weekend since the country began easing coronavirus curbs last month.

With early-summer weather helping retail therapy return with a vengeance, the term “bobok sobi” - revenge shopping - has trended on the nation’s social media, as people rush to make purchases delayed by social-distancing rules.

After an initial explosion in infections made South Korea the first major outbreak outside China from the virus and COVID-19, the disease it causes, the authorities have limited the spread with widespread testing, intensive contact-tracing and tracking apps, avoiding the long lockdowns seen in many countries.

Seoul began easing curbs on April 19 and has still managed to bring down new daily infections from over 900 in late February to around 10 in the past week. The government will relax the rules further from Wednesday, prime minister Chung Sye-kyun said on Sunday.

“Revenge shopping” quickly spread online after Wu Xiaobo, an economist from neighbouring China, was cited discussing the emergence of “revenge consumption” in February.

A South Korean blog post on Wu’s forecast was widely shared, while news outlets increasingly have used the term to describe the bounce-back in spending.

The spree is boosting the economy after the pandemic knocked 40% off department-store sales in March from a year earlier, but economists caution the bounce will likely be short-lived.

Shares in Hyundai Department Store (069960.KS) and Shinsegae Department Stores (004170.KS) have rebounded by about one-fourth over the past month, while cinema chain CJ CGV (079160.KS) surged more than 50%. South Korea's stock market .KS11 has bounced 35% from the year's low in March.

“The general unleashing of pent-up demand will lift consumption in the second quarter, but that won’t do much in the face of a bleak outlook for international trade and dropping corporate investment,” said Park Sang-hyun, chief economist at Hi Investment & Securities.

The pandemic crushed Korea’s exports in April, with the fastest drop since the global financial crisis signalling grim prospects for Asia’s fourth-biggest economy to snap back from its deepest biggest contraction since 2008 in the first quarter.

Online reservations for Jeju tee times were fully booked on one site, and the turnout at Eco Land Theme Park Golf & Resort seemed bigger than during the Chuseok holiday, usually the most crowded of the year, said sales manager Park Sung-wook.

At a rest area near Seoul heading into the long weekend, a mother looked after her two daughters as she sipped an iced latte. She said she would splurge on a cup every day during her holiday.

“I’m going to make up for the self-control I have been keeping up at home - I think I’ve had enough of self-isolating,” she said, but added, “I’m still going to wear a mask.”