Both Modi and Xi are expected to hold a bilateral meeting on Tuesday. 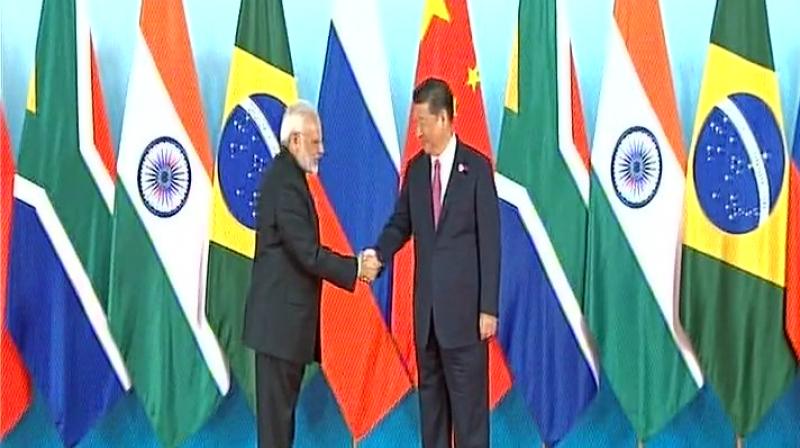 Xiamen: Indian Prime Minister Narendra Modi was welcomed by Chinese President Xi Jingping at the International Conference Centre in Xiamen where the BRICS nations will map out their future course.

A summit of five major developing countries- Brazil, Russia, India, China and South Africa- are meeting in the southeastern Chinese city of Xiamen.

Prime Minister Narendra Modi said he is looking forward to building upon the results and outcomes of the Goa Summit.

He said, "I also look forward to productive discussions and positive outcomes that will support the agenda of a stronger BRICS partnership under the chairmanship of China."

The three day long summit at Xiamen comes days after India and China ended the 73-day standoff at Doklam near Sikkim border.

Both Modi and Xi are expected to hold a bilateral meeting on Tuesday.

Modi will attend BRICS plenary session, opening ceremony of BRICS Cultural Festival in Xiamen, China on Monday and will also attend a meeting with BRICS Business Council and a Signing Ceremony in Xiamen.

BRICS was formed as an association of fast-growing large economies about a decade ago to advocate better representation for developing countries and challenge the Western-dominated world order that has prevailed since the end of World War II. It soon achieved agreement to increase the share of voting rights for emerging markets in world financial bodies, the International Monetary Fund and World Bank. It has also started operating its own development bank.