The attack on Imran Khan's convoy, apparently by a lone gunman, killed one man and wounded at least 10 others 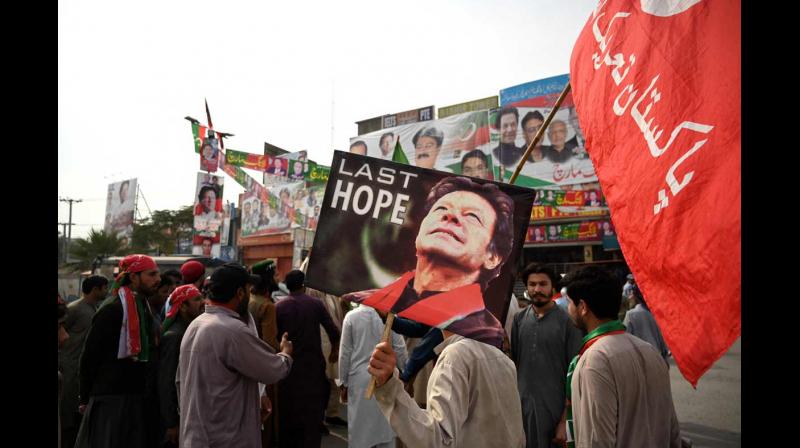 Supporters of former Pakistani prime minister Imran Khan, take part in a protest near the container truck a day after the assassination attempt on Khan, at the cordoned-off site of a gun attack in Wazirabad on November 4, 2022. (Photo: AFP)

WAZIRABAD: Pakistani former prime minister Imran Khan was recovering in hospital on Friday after an assassination attempt that left him with a gunshot wound to the leg.

The attack on his convoy, apparently by a lone gunman, killed one man and wounded at least 10 others, significantly raising the stakes in political crisis gripping the country since Khan's ousting in April.

Khan "was stable and he was doing fine" at Shaukat Khanum hospital in the eastern city of Lahore, his doctor Faisal Sultan told AFP Friday morning.

The 70-year-old former international cricket star had been leading a campaign convoy of thousands since last week from Lahore to the capital Islamabad when he was attacked.

Khan escaped with at least one bullet wound to his right leg when a gunmen sprayed pistol fire at his modified container truck as it slowly drove through a thick crowd in Wazirabad, around 170 kilometres (100 miles) east of Islamabad.

Senior aide Raoof Hasan told AFP it was "an attempt to kill him, to assassinate him".

Several leaders of Khan's Pakistan Tehreek-e-Insaf (PTI) party have blamed the government for the assassination attempt, which the authorities have denied.

Chaudhry said PTI officials would meet later Friday to discuss the immediate fate of Khan's campaign march, but vowed it would continue.

"The real freedom long march will continue and the movement for people's rights will remain until an announcement on the general elections," he tweeted.

For now, Khan's campaign truck has become a crime scene, cordoned off and guarded by commandos as forensic experts comb the area.

Overnight, thousands of Khan supporters gathered for a peek, many waving party banners.

Information Minister Marriyum Aurangzeb said Thursday the attacker had been taken into custody, and shared an apparent confession video that was circulating online.

"I did it because (Khan) was misleading the public," says a dishevelled man in the video, shown with his hands tied behind his back in what appears to be a police station.

He adds that he was angry with the procession for making a racket during the call to prayer that summons Muslims to the mosque five times a day.

Pervaiz Elahi, the Chief Minister of Punjab, said officers who leaked the video would be disciplined.

Pakistan has been grappling with Islamist militancy for decades, and politicians are frequently targeted by assassination attempts.

The attack on Khan had echoes of the 2007 assassination of another former prime minister, Benazir Bhutto, who died when a huge bomb detonated near her vehicle as she greeted supporters in the city of Rawalpindi while standing up through the roof hatch.

Khan was booted from office in April by a no-confidence vote after defections by some of his coalition partners, but he retains huge support in the South Asian country.

Khan was voted into power in 2018 on an anti-corruption platform by an electorate tired of dynastic politics, but his mishandling of the economy -- and falling out with a military accused of helping his rise -- sealed his fate.

Since then, he has railed against the establishment and Prime Minister Shehbaz Sharif's government, which he says was imposed on Pakistan by a "conspiracy" involving the United States.

Khan has repeatedly told supporters he was prepared to die for the country, and aides have long warned of unspecified threats made on his life.

The attack drew international condemnation including from the United States, which had uneasy relations with Khan when he was in power.

"Violence has no place in politics, and we call on all parties to refrain from violence, harassment and intimidation," US Secretary of State Antony Blinken said in a statement.