The attacker tried to enter the Dargah Fatehpur in Jhal Magsi district of Balochistan and blew himself up when he was stopped by police. 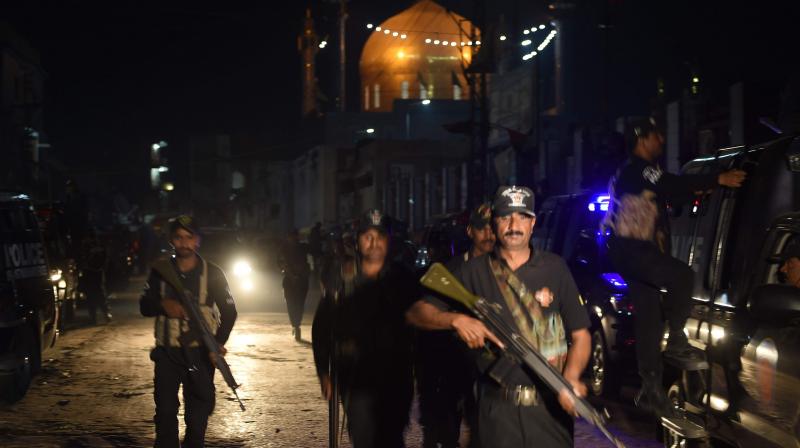 The explosion took place at the shrine at a time when hundreds of people had gathered to pay their respect. (Photo: AFP/Representational)

Karachi: At least 13 people were killed and nearly 20 others injured, on Thursday, when a suicide bomber blew himself up at a Sufi shrine packed with devotees in Pakistan's troubled Balochistan province, police officials said.

The attacker tried to enter the Dargah Fatehpur in the Jhal Magsi district of Balochistan and blew himself up when he was stopped by the police at the main entrance, Deputy Commissioner Asadullah Kakar said.

Officials said at least 13 people were killed and nearly 20 others injured. At least one policeman was also killed.

A senior Levies official confirmed that so far 12 bodies have been recovered from the blast site.

Rescue officials fear that the death toll could rise as the blast took place when there was a heavy rush of devotees who had gathered at the shrine to pay their respect. Thursdays are usually busy in terms of attendance at shrines.

Balochistan Home Minister Mir Sarfaraz Bugti said that so far it appeared to be a suicide attack. "Investigations are still continuing and the injured have been moved to the district headquarters hospital in Jhal Magsi," Bugti said.

Balochistan government spokesman Anwarul Haq Kakar confirmed that it was a suicide attack.

Initial probe showed that the blast occurred when a sufi dance called dhamal was going in the premises of the shrine. No group claimed responsibility for the attack but the Taliban usually target shrines as they consider it un-Islamic.

The local administration declared an emergency at hospitals in Sibbi and Dera Murad Jamali.

This is the second major attack at a shrine in Balochistan where in November 2016, at least 52 people were killed and 102 injured in a blast at the shrine of Shah Norani in Khuzdar district.