Buddhism, India’s gift to Thailand, and to the world, once more reveals its phenomenal power of adaptation in the 21st century. 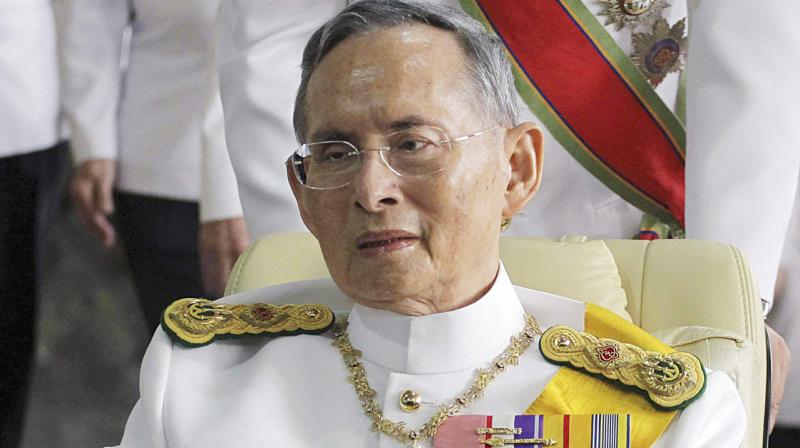 January 20, 2017 marked the 100th day ritual of the passing of King Bhumibol Adulyadej. To commemorate it, Thailand’s celebrated maestro Somtow Sucharitkul premiered the fifth of his DasJati opera series; “Chariot of Heaven” at the Thailand Cultural Centre in Bangkok. It was a fitting tribute to the late monarch, a remarkably versatile musician and composer who for years played live on Thai radio every Friday evening with his Aw Saw Band, and helped revive Thailand’s rich and varied classical theatre and dance lineages.  In 2007, the ministry of culture conferred the title “Supreme Patron of Thai Cultural Heritage” upon His Majesty in recognition of his support for artists.

Thailand’s ministry of culture requested Somtow’s Opera Siam to perform “Chariot of Heaven”, as it tells the story of King Nemi of Mithila, who, like Bhumibol Adulyadej, was greatly loved and revered by his people. In this Jataka tale, Lord Indra appears to King Nemi in a dream and sends a magical chariot drawn by a thousand horses, to carry him to the Tavitamsa Heaven, which appears to the people of Mithila as a second moon rising in the night sky. King Nemi asks Mathali, Indra’s charioteer, to show him the fearsome Naraks, hell realms where sinners are burned and tormented by ferocious asuras. King Nemi then ascends to Indra’s Heaven of 33 devas, where he imparts the teachings of the dharma. After seven days King Nemi returns to Mithila and exhorts his people to do good, for even the Gods are trapped in the wheel of samsara and must take birth in the Naraks if they did not plant roots of virtue.

“It was an Indian-American organisation in Texas that first commissioned me to compose an opera ‘with something to do with India’,” said Somtow.  “I chose the iconic tale of Temiya, the mute prince because of the challenge of creating an opera in which the title character doesn’t open his mouth till the last few minutes. This drew me further into the world of the Jatakas, but it was when I was creating my third Jataka-based opera, ‘Bhuridat’, that I realised I had to do all 10 of the DasJatis.”

India shares a long history with Thailand, which began when Emperor Ashoka sent Buddhist missionaries to Southeast Asia. The Chakri Kings are named after Rama, Vishnu’s seventh avatar. Thailand adopted the Ramayana as the Ramakien, which absorbed elements of Thai history and culture into the narrative, and portrays Rama as a Buddhist prince, Phra Narai, for Narayana. In June 2016 India and Thailand signed two agreements on educational and cultural exchange, and India’s ambassador to Thailand, Bhagwant Singh Bishnoi and his wife Rupa attended the “Chariot of Heaven” premiere. On November 10, 2016 India’s Prime Minster Narendra Modi journeyed to Bangkok to lay a wreath at the Grand Palace, calling King Bhumibol “one of the tallest leaders of our times”.

In this official year of mourning, many Thais have made vows of tham dee pue phor, “doing virtuous deeds for our father” to honour the King’s extraordinary range of talents and his legacy of humanitarian service to his nation. His portrait is seen everywhere, with floral offerings and books for citizens to inscribe their remembrances of the monarch, a constant presence for 70 years, who combined a regal bearing with a common touch, fondly known as the “Development King”, ever striding through fields and jungles, carrying pencils, maps and a camera, always striving to improve the lives of his people.

In is in this spirit of service that Somtow has created the DasJati project. “It has reached the closing chapters of my life,” says Somtow. “I would like to give Thailand this one lasting gift before I die — a gift that will continue to renew itself and feed the wellsprings of culture, education, religion, tourism and patriotism, and give employment to artists, singers, musicians, designers, the education and tourism industry for generations to come.”

Buddhism, India’s gift to Thailand, and to the world, once more reveals its phenomenal power of adaptation in the 21st century, with the young artists of Opera Siam and Somtow Sucharikul’s celestial music. King Bhumibol once said, “Indeed, music is in all of us and forms a vital part of every man’s life.”

I hope to see the DasJati operas performed in India in the near future. King Bhumibol will be there in spirit.