Won’t stop fighting for Kashmiris, arrest me if you can: Hafiz Saeed dares Pak 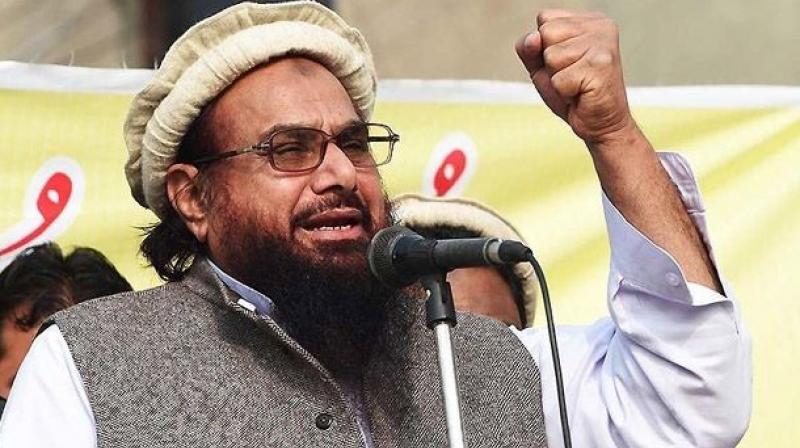 Hafiz Saeed, who was released from house arrest in Pakistan in November 2017, carries a USD 10 million bounty on his head. (Photo: File/AFP)

Lahore: Outlawed Jamaat-ud-Dawa (JuD) chief and Mumbai terror attack mastermind Hafiz Saeed on Monday dared the Pakistani government to arrest him if it can and said he will not stop fighting the case of Kashmiri people.

"If the Pakistani government wants to arrest me...come and go for it but I will not stop dedicating 2018 for Kashmiris," Saeed said while addressing a rally in Lahore.

"We will emerge more strongly if you try to suppress us," said Saeed, who was listed as a Specially Designated Global Terrorist by the US.

He criticised ousted Prime Minister Nawaz Sharif for not playing his role on the issue of Kashmir.

"We may initiate efforts to make you (Sharif) prime minister again if you pledge to work for freedom of Kashmir," he said.

He also claimed that on the pressure of the US and India "our media coverage is banned in Pakistan".

Saeed, who was released from house arrest in Pakistan in November 2017, carries a USD 10 million bounty on his head.

He asked the government to allow the UN Security Council monitoring team to visit JuD and Falah-i-Insaniat Foundation (FIF) centres in the country so that it could come to know about their charity work. "We welcome the international monitoring teams to our centres."

The JuD is believed to be the front organization for the Lashkar-e-taiba (LeT) which is responsible for carrying out the 2008 Mumbai attacks that killed 166 people. It has been declared as a foreign terrorist organisation by the US in June 2014.