Kim Yong-Nam will be the most senior official from the North for years to travel to the other side of the Demilitarized Zone. 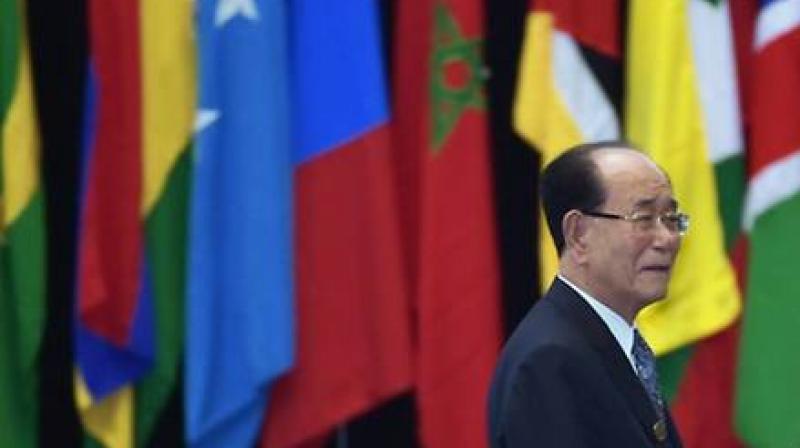 Kim Yong-Nam will be the highest-level Northern official to visit the South since 2014.(Photo: AFP)

Seoul: North Korea's ceremonial head of state will visit the South this week and attend the Winter Olympics opening ceremony as the divided peninsula witnesses a rare thaw after a year of high tensions over Pyongyang's nuclear programme.

Kim Yong-Nam will be the most senior official from the North for years to travel to the other side of the Demilitarized Zone that has divided the two Koreas for decades.

His trip will be the diplomatic high point of the rapprochement between the two Koreas triggered by the Pyeongchang Olympics in the South, which have their opening ceremony on Friday - although analysts warn that their newly warmed relations may not last long beyond the Games.

Tensions spiralled in 2017 as the North carried out multiple weapons tests, including intercontinental ballistic missiles it says are capable of reaching the mainland United States, and its most powerful nuclear blast to date.

For months Pyongyang ignored Seoul's entreaties to take part in a "peace Olympics", until leader Kim Jong-Un indicated his willingness to do so in his New Year speech.

That set off a rapid series of meetings which saw the two agree to march together at the opening ceremony and form a unified women's ice hockey team, their first for 27 years.

The North's Olympic participation would include a visit by a high-level delegation, they agreed.

It will be led by Kim Yong-Nam, who is leader of the Presidium of the Supreme People's Assembly, the North's ruling party-controlled parliament, Seoul's unification ministry said in a statement late on Monday.

Kim - who is not a close blood relative of leader Kim Jong-Un - will arrive on Friday for a three-day visit, accompanied by three other officials and 18 support staff, the ministry said it had been told by Pyongyang.

The South Korean ministry did not explicitly say whether Kim would go to the Pyeongchang opening ceremony -- which will be attended by the US Vice President Mike Pence.

Kim Yong-Nam will be the highest-level Northern official to visit the South since 2014.

But it may be seen as disappointing by some if he proves to be the most important member of the delegation, as he is largely considered a figurehead whose public diplomatic role leaves it unclear how much political power he really has.

He is regarded as the ceremonial head of state, but does not hold the title of national president -- and nor does Kim Jong-Un.

Instead it is retained by Kim Jong-Un's grandfather, the North's founder Kim Il-Sung, who remains Eternal President of the Democratic People's Republic of Korea -- the country's official name -- despite dying in 1994.

Speculation about who could lead the delegation had been rife in the South for weeks, with some analysts pointing to Choe Ryong-Hae, who is the vice chairman of the Central Committee of the ruling Workers' Party and seen as Kim Jong- Un's right-hand man.

Others had even suggested the leader's younger sister Kim Yo-Jong, who was recently promoted to a senior political position.

Choe was one of three senior Pyongyang officials who made a surprise visit to the South during the 2014 Asian Games along with former military chief Hwang Pyong-So and Kim Yang- Gon, a top official on inter-Korea affairs who died in a car crash in 2015.

They did not meet any senior officials of the government in Seoul, but it may be different on this occasion.

The South's new President Moon Jae-In has long argued for engagement to bring the North to the negotiating table over its nuclear ambitions, which have seen it subjected to multiple sets of United Nations Security Council sanctions.

Seoul and Washington have agreed to delay annual large- scale joint military exercises which always infuriate Pyongyang, but only until the end of the Paralympics in late March.