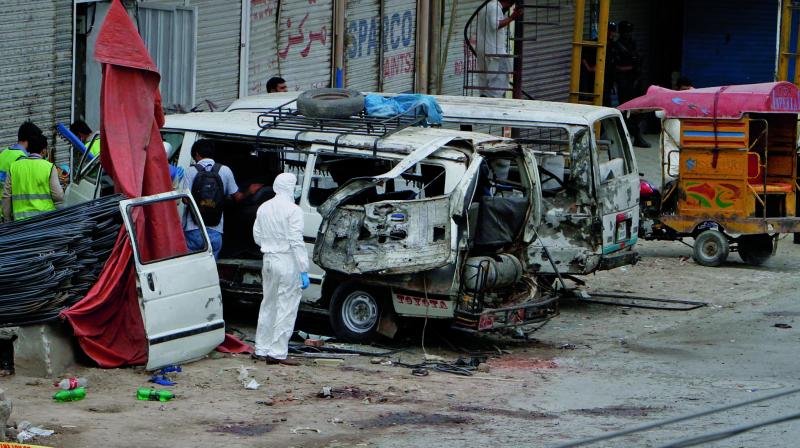 Investigators examine damaged vehicles at the site of the suicide bombing in Lahore, Pakistan. (Photo: AP)

Islamabad: Seven people, including five Pakistani soldier, were killed and 19 people wounded in a suicide blast targeting a Census team in Lahore on Wednesday.

The blast, near the Cantonment area in Lahore, struck a vehicle carrying the Army personnel escorting the Census team. The security forces cordoned off the area near Bedian Road after the blast.

“A private van engaged by Lahore Cantonment was carrying 17 Army personnel when it was attacked by a suicide bomber,” Pakistan Bureau of Statistics, Lahore, said in a report.

Tehreek-e-Taliban Pakistan claimed responsibility for the attack. Meanwhile, Army Chief General Qamar Bajwa said that the Census would be completed at any cost.

“Conduct of Census is a national obligation... These sacrifices will only strengthen our resolve and with the support of the entire nation, we will cleanse the menace of terrorism from our soil,” the Inter-Services Public Relations quoted the Army Chief as saying.