The jet reportedly managed to land on its second attempt, hitting the ground with its landing gear first and then its nose. 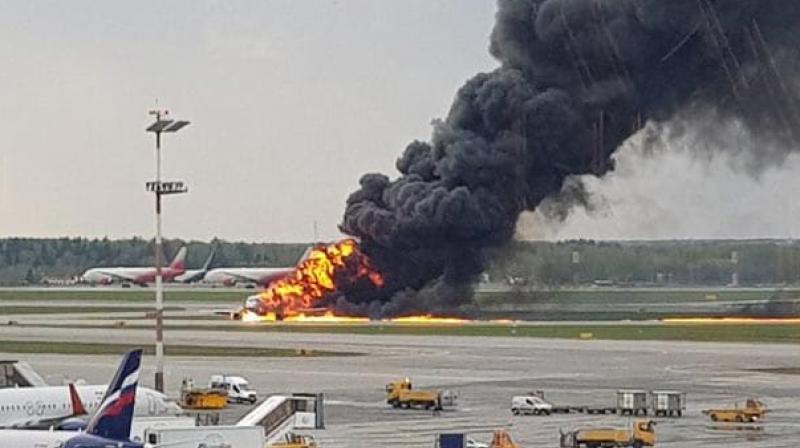 Moscow: Forty-one people including at least two children have died after a Russian passenger plane made an emergency landing and erupted in a huge ball of fire and black smoke at Moscow's busiest airport on Sunday, investigators said.

Dramatic footage that went viral on social media showed Aeroflot's Sukhoi Superjet 100 aircraft crash-landing and then speeding along the runway at Sheremetyevo international airport, flames pouring from its fuselage.

Passengers could be seen leaping onto an inflatable slide at the front and running from the blazing plane as huge black columns of smoke billowed into the sky.

"There were 78 people including crew members on board the plane," the Investigative Committee said in a statement, adding that the plane had been flying to the northwestern Russian city of Murmansk.

"According to the updated info which the investigation has as of now, 37 people survived."

A spokeswoman for the investigators confirmed the death toll was 41.

Another 11 people were injured, Dmitry Matveyev, the Moscow region's health minister said earlier in the day.

'Horror before our eyes'

Witness Alyona Osokina said she was inside the terminal when she suddenly saw a plane on fire rushing along the runway.

"The blaze was devouring the plane," she told Rain TV.

Osokina said that fire engines had arrived quickly but could not immediately put out the blaze.

"This horror and tragedy happened before our eyes," she said, adding that those who managed to flee the plane then walked calmly towards the airport.

"I believe they were in a state of deep shock."

"After the take-off, the crew reported an anomaly and decided to come back to the departure airport. At 6:30 pm, the aircraft made an emergency landing," it added.

Russia's flagship carrier said the plane had to return to the airport "due to a technical reason" and its engines caught fire upon landing. Previous reports had said the fire broke out in mid-air.

The jet reportedly managed to land on its second attempt, hitting the ground with its landing gear first and then its nose.

The plane's fuel tanks were full and a much bigger death toll could have been a real possibility, aviation experts said.

Investigators said they were looking into various lines of inquiry and it was premature to draw any conclusions about the cause of the accident.

Russian President Vladimir Putin had offered his condolences to the victims' loved ones, the Kremlin said.

He has also said the investigation "should be as thorough as possible," the Kremlin added.

The Murmansk region -- where many of the casualties are believed to be from -- will go into a three-day period of mourning beginning Monday.

Some flights have been diverted to other Moscow airports or Nizhny Novgorod, some 400 kilometres (250 miles) east of the Russian capital.

Numerous Aeroflot flights are expected to be affected in the coming days.

The country's aviation's safety record has been chequered and the latest disaster is seen as a huge blow to its already struggling aviation industry.

The Sukhoi Superjet-100 was the first civilian aircraft developed in the country's post-Soviet era.

At the time of its launch, in 2011, it was a source of national pride and seen as one of Putin's pet projects.

But numerous technical problems with the plane have been reported in recent years and Russia has struggled to convince foreign carriers to purchase it.

The tabloid newspaper Komsomolskaya Pravda quoted one passenger, Petr Egorov, who said: "We had just taken off and the aircraft was hit by lightning.... The landing was rough, I almost passed out from fear."

The government offered subsidies to encourage Russian airlines to buy the Superjet and Aeroflot has become its main operator.

After the tragedy some suggested that Russia may be better off abandoning the Sukhoi Superjet altogether.