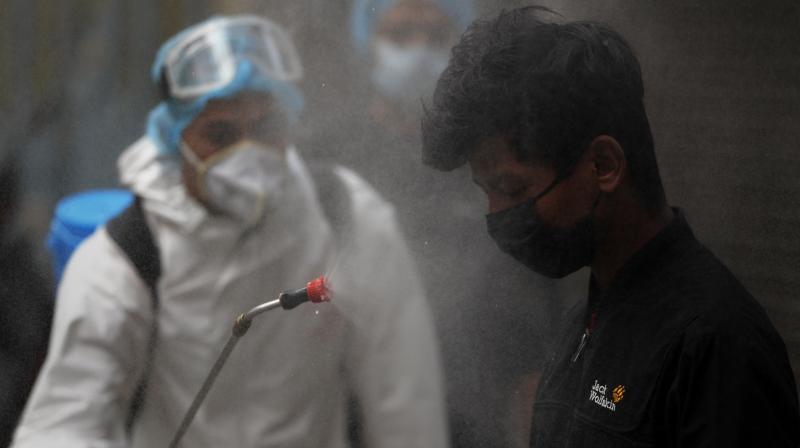 A Nepalese volunteer sprays disinfectants on a man while he arrives to get free food distributed by social workers during lockdown to control the spread of the new coronavirus in Kathmandu. (AP)

Kathmandu: Six Indians, who were kept in isolation at Koshi Hospital in Biratnagar after testing positive for COVID-19, were discharged on Wednesday after recovering from the infection.

"They will be kept at a quarantine facility in Rani Markaz of Biratnagar where they will go through observation and tests will be conducted in certain intervals of time," Dr Sangita Mishra, Medical Superintendent of Koshi Hospital told reporters over the phone.

All the six persons were discharged after testing COVID-19 negative twice, confirming their full recovery after 19 days of stay at the hospital.

The patients hail from New Delhi and were staying at a mosque in Udaypur district before testing positive for COVID-19.

After the patients recovered, Nepal's Social Development Minister of Province-1, Jeevan Ghimire, hosted a farewell at the hospital premises.

Another group of seven Indians undergoing treatment at the same hospital are still kept under observation and are recovering, Dr Mishra said.

With the recovery of the six persons, the number of patients cured of the virus in Nepal rose to 22, while 60 others are still under observation at various hospitals in the country.