‘Race against water’ as rain threatens Thai boys in the cave

Several Thai Navy divers and medics are staying with them and the video footage showed the group in seemingly good spirits. 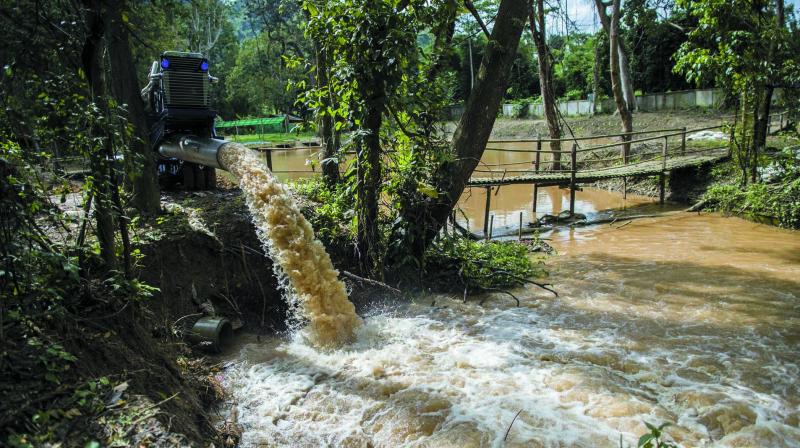 Water is pumped from Tham Luang cave during rescue operations for the trapped 12 boys and their coach, at Khun Nam Nang Non Forest Park in the Mae Sai district of Chiang Rai province. (Photo: AFP)

Mae Sai, Thailand: Thai rescuers on Thursday said they may be prodded into a complex extraction of 12 boys and their football coach from a flooded cave if forecast rains hammer the mountainside and jeopardise the rescue mission.

Thirteen sets of diving equipment have been prepared for the team, who have endured 12 nights underground in the Tham Luang cave complex in northern Thailand, a saga that has transfixed a nation and united Thais in prayers for their safe return.

Water is being pumped out from the deluged cave round-the-clock, reducing the flooding by one centimetre an hour.

But with rain forecast to begin on Friday, the Chiang Rai provincial governor helming the unprecedented rescue effort conceded the mission was now “a race against the water”.

“Our biggest concern is the weather. We are calculating how much time we have if it rains, how many hours and days,” Narongsak Osottanakorn told reporters, without providing further details.

In a sign of increased urgency, Narongsak said medics and Thai Navy Seal divers are assessing whether the boys are fit and well enough to be taken out early — apparently softening his instance on Wednesday that “no risk” will be taken with the evacuation.

The prospect of the stranded “Wild Boar” team diving out is fraught with risk.

It takes seasoned cave diving experts around six hours to reach the muddy ledge where the boys are sheltering around four kilometres (2.4 miles) into the cave.

Many of the youngsters — who are aged between 11-16 — are unable to swim and none have diving experience.

Three days after contact was made with the group, Thai Navy Seal experts continued to teach them the basics of diving.

But the areas where diving is still necessary are tight and may require the boys to swim through murky waters unaccompanied.

The looming rains have further tweaked anxiety among relatives of the trapped team, who on Wednesday appeared smiling, wrapped in foil blankets and in good health in video footage circulated by the Thai Navy.

“Yesterday I felt hopeful... Today I heard the rain is coming,” said Sunida Wongsukchan, great aunt of one of the boys Ekkarat Wongsukchan, 14, who goes by the nickname “Bew”.

In a two-pronged strategy, rescuers are also hunting for a chimney down to the boys, creating a potential second option for evacuation in the event heavy rains force their hand.

They have enlisted the help of bird’s nest collectors from southern Thailand attuned to finding hidden holes on forested cliffsides.

Authorities still hope they can manage any fresh deluge, with high-powered pumps draining 128 million litres (34 million gallons) of water so far from the cave in a round-the-clock effort.

“We are draining as much as we can,” said Khao Khieupakdi, a Bangkok disaster prevention official, who like scores of other specialists has been seconded to northern Thailand.

Water has been cleared from the entrance to a rescue base camp in “chamber three” inside the cave, but onward sections towards the boys remain impassable without diving, he said. “I am concerned as the forecast said is for more rain.”

Officials have ruminated on the possibility of the boys remaining in the cave until the monsoon season passes in three or four months.

But that option is a last resort and may have to be taken off the table if flooding worsens.

Concerns for the mental and physical health of the boys are also mounting after a prolonged ordeal in the dark, claustrophobic cave complex.

Experts say the risk of psychological damage is high for youngsters trapped in traumatic conditions, while the lack of light may cause confusion.

British cave divers found the emaciated and dishevelled group on Monday, huddled on a muddy shelf with flood waters lapping ominously below, after nine days missing.

Several Thai Navy divers and medics are staying with them and the video footage showed the group in seemingly good spirits.

“They cannot do anything... They have to save energy,” said Maj. Gen. Bancha Duriyaphan.

“They are chit-chatting in general. Talking, eating and sleeping,” he said.