Opponents and protesters saw it as the start of a slippery slope tipping the international finance hub into authoritarianism. 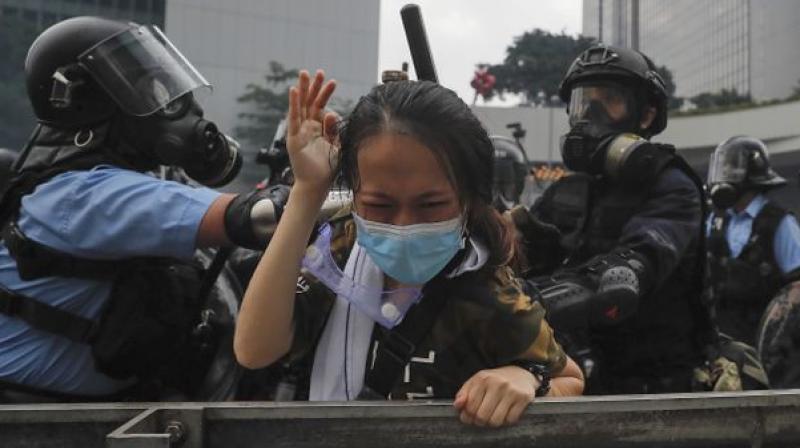 The city's subway system — which carries four million people daily — was shut down entirely on Friday night and throughout Saturday, bringing much of the metropolis to a halt. Major supermarket chains and malls announced they were closing, leading to long lines and panic buying as residents stocked up on essentials. (Photo: AP | File)

Thousands of protesters staged unsanctioned marches and flash mob protests at multiple locations on Saturday, a day after the city's leader outlawed face coverings at protests, invoking colonial-era emergency powers not used for half a century.

Pro-democracy lawmakers are seeking an emergency injunction later Sunday in a bid to overturn the face mask ban and declare the emergency powers invalid because they bypass the city's legislature.

Last deployed in 1967, the powers allow chief executive Carrie Lam to make "any regulations whatsoever" during a time of public danger. The move was welcomed by government supporters and Beijing.

But opponents and protesters saw it as the start of a slippery slope tipping the international finance hub into authoritarianism.

"I would say this is one of the most important constitutional cases in the history of Hong Kong," lawmaker Dennis Kwok told reporters outside court on Sunday.

"This could be the very last constitutional fight on our part. In the name of law they are trying to hurt the people and they try to crush the opposition. If this emergency law just gets a pass just like that Hong Kong will be deemed into a very black hole."

Hong Kong has been battered by four months of huge and increasingly violent pro-democracy protests.

The rallies were ignited by a now-scrapped plan to allow extraditions to the mainland, which fuelled fears of an erosion of liberties promised under the 50-year "one country, two systems" model China agreed ahead of the 1997 handover by Britain.

After Beijing and local leaders took a hard line, the demonstrations snowballed into a wider movement calling for more democratic freedoms and police accountability.

Lam has refused major concessions but struggled to come up with any political solution, leaving police and demonstrators to fight increasingly violent battles as the city tips into recession.

The worst clashes to date erupted on Tuesday as China celebrated 70 years of Communist Party rule, with a teenager shot and wounded by police as he attacked an officer.

A 14-year-old boy was then shot and wounded on Friday night when a plainclothes police officer who was surrounded by a mob of protesters throwing petrol bombs fired his sidearm.

That night masked protesters went on a rampage in dozens of locations, trashing subway stations and businesses with mainland China ties.

The city's subway system — which carries four million people daily — was shut down entirely on Friday night and throughout Saturday, bringing much of the metropolis to a halt. Major supermarket chains and malls announced they were closing, leading to long lines and panic buying as residents stocked up on essentials.

Thousands of masked protesters still came out onto the streets throughout Saturday despite the mask ban and transport gridlock, although the crowds were smaller than recent rallies.

On Sunday, the subway operator said 45 stations would open but 48 remained shuttered, many of them in the heart of the city's main tourist districts as well as those neighbourhoods areas hit hardest by the protests and vandalism.

Online forums used by the largely leaderless protest movement to organise were encouraging protesters to hold an unsanctioned rally in the city's Victoria Park later Sunday. But with most of the stations in that area of the city closed it was unclear if they would be able to muster decent numbers.

Lam has defended her use of the emergency powers and says she is willing to make more executive orders if the violence continues. "We cannot allow rioters any more to destroy our treasured Hong Kong," Lam said in a stony-faced video statement on Saturday.

But protesters have vowed to keep hitting the streets.

"The anti-face mask law is the first step," Hosun Lee, a protester in Causeway Bay, told AFP, saying he feared more laws under the emergency order were on the way.

Protester demands include an independent inquiry into the police, an amnesty for the more than 2,000 people arrested and universal suffrage — all requests rejected by Lam and Beijing.