The bomber flew from the Pacific US-administered territory of Guam and joined US F-22 and F-35 stealth fighters in the annual exercises. 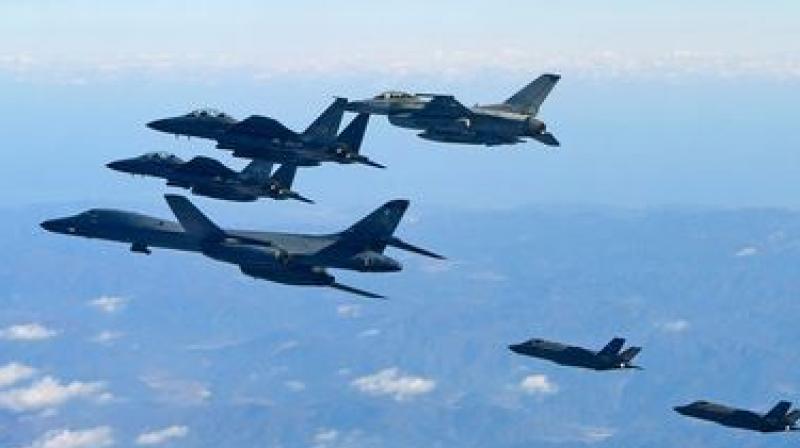 The drills come a week after North Korea said it had tested its most advanced intercontinental ballistic missile capable of reaching the United States. (Photo: AFP)

Seoul: A US B-1B bomber on Wednesday joined large-scale US-South Korean military exercises that North Korea has denounced as pushing the peninsula to the brink of nuclear war, as tension mounts between the North and the United States.

The bomber flew from the Pacific US-administered territory of Guam and joined US F-22 and F-35 stealth fighters+ in the annual exercises, which run until Friday.

The drills come a week after North Korea said it had tested its most advanced intercontinental ballistic missile capable of reaching the United States, as part of a weapons programme that it has conducted in defiance of international sanctions and condemnation.

Asked about the bomber's flight, China's foreign ministry spokesman Geng Shuang told a regular news briefing in Beijing: "We hope relevant parties can maintain restraint and not do anything to add tensions on the Korean peninsula."

North Korea regularly threatens to destroy South Korea, the United States and Japan. Its official KCNA state news agency said at the weekend that US President Donald Trump's administration was "begging for nuclear war" by staging the drills.

It also labelled Trump, who has threatened to destroy North Korea if the United States is threatened, "insane".

KCNA said on Tuesday that the exercises in which the bomber took part are "simulating an all-out war", including drills to "strike the state leadership and nuclear and ballistic rocket bases, air fields, naval bases and other major objects..."

US Republican Senator Lindsey Graham on Sunday urged the Pentagon to start moving US military dependants, such as spouses and children, out of South Korea, saying conflict with North Korea was getting close.

The US-South Korea drills coincide with a rare visit to the isolated North by UN political affairs chief Jeffrey Feltman.

Feltman, a former senior US state department official, is the highest-level UN official to visit North Korea since 2012. The state department said on Tuesday he was not carrying any message from Washington.

The military exercises, called "Vigilant Ace", are designed to enhance joint readiness and operational capability of US extended deterrence, South Korea's joint chief of staff said in a statement.

North Korea has vehemently criticised the drills since the weekend, saying the exercise precipitates US and South Korean "self-destruction".

China and Russia had proposed that the United States and South Korea stop major military exercises in exchange for North Korea halting its weapons programmes. China is North Korea's lone major ally and fears widespread instability on its border.

North Korea has tested dozens of ballistic missiles, two of which flew over Japan, and conducted its sixth and largest nuclear bomb test in September.

It says its weapons programmes are a necessary defence against US plans to invade. The United States, which has 28,500 troops stationed in South Korea, a legacy of the 1950-53 Korean War, denies any such intention.