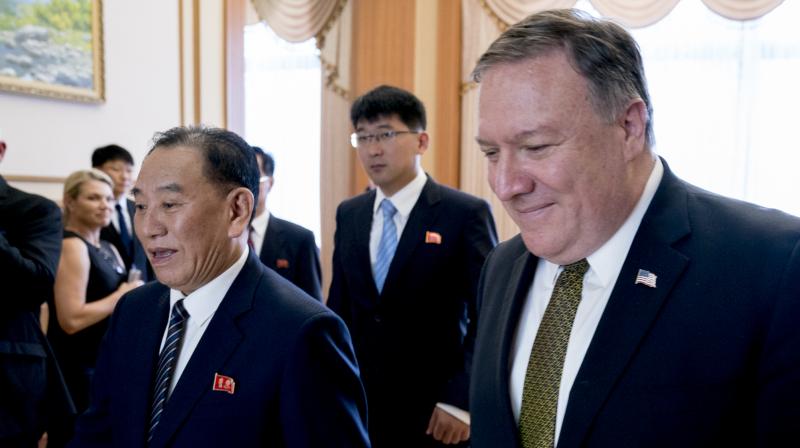 Pyongyang: North Korea says high-level talks with a US delegation led by Secretary of State Mike Pompeo were “regrettable” and has accused Washington of trying to unilaterally pressure the country into abandoning its nukes.

The statement says that the United States betrayed the spirit of last month’s summit between President Donald Trump and North Korean leader Kim Jong Un by making unilateral demands on “CVID,” or the complete, verifiable and irreversible denuclearization of North Korea.

It says the outcome of the follow-up talks was “very concerning” because it has led to a “dangerous phase that might rattle our willingness for denuclearization that had been firm.”

Secretary of State Mike Pompeo has wrapped up two days of talks with senior North Korean officials without meeting Kim Jong Un but with commitments for new discussions on denuclearization and the repatriation of the remains of American soldiers killed during the Korean War.

Before departing Pyongyang on Saturday, Pompeo told reporters that his conversations with senior North Korean official Kim Yong Chol had been “productive,” conducted “in good faith” and that “a great deal of progress” had been made in some areas. But he stressed that “there’s still more work to be done” in other areas, much of which would be done by working groups that the two sides have set up to deal with specific issues.

Pompeo said that a Pentagon team would be meeting with North Korean officials on or about July 12 at the border between North and South Korea to discuss the repatriation of remains and that working-level talks would be held soon on the destruction of North Korea’s missile engine testing facility.

North Korea’s state media have reported the visit of US Secretary of State Mike Pompeo a day after he arrived in Pyongyang but did not describe the nature of his talks with North Korean officials over the future of the country’s nuclear weapons program.

The agency provided no further details.

Pompeo met for nearly three hours Friday with a senior North Korean official in Pyongyang to nail down specifics of commitments on denuclearisation made at Trump’s summit with Kim.

Secretary of State Mike Pompeo has begun his first trip to Pyongyang since President Donald Trump’s summit with leader Kim Jong Un last month with a vow to nail down the specifics of the commitments Kim made on denuclearization.

Pompeo has the crucial task of dispelling growing skepticism over how seriously Kim is about giving up his nuclear arsenal and translate the upbeat rhetoric following the first meeting between leaders of the US and North Korea into concrete action.

He was met at the Pyongyang airport by Kim Yong Chol, a senior ruling party official and former intelligence chief, and Foreign Minister Ri Yong Ho to begin his third visit since April and first since the June 12 summit.