Pompeo insists that talks with North Korea were 'very prodcutive'

He said some progress had been made towards agreeing 'the modalities' of North Korea's destruction of a missile facility. 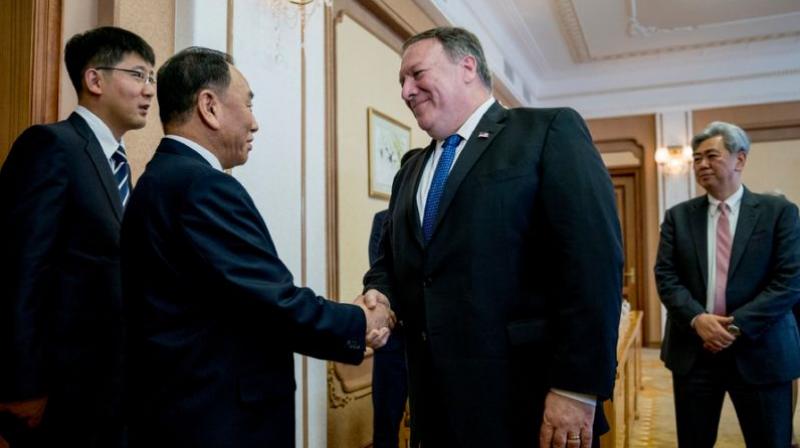 Pyongyang: US Secretary of State Mike Pompeo insisted Saturday that two days of talks with his North Korean counterpart on dismantling Pyongyang's nuclear arsenal had been "very productive".

But, briefing reporters before flying on to Tokyo, he offered few new details as to how North Korea would honour its commitment to "denuclearise" in exchange for US security guarantees.

"These are complicated issues, but we made progress on almost all of the central issues, some places a great deal of progress, other places there's still more work to be done," he said.

Last month, at a historic summit with US President Donald Trump, Kim agreed to "work towards complete denuclearisation of the Korean Peninsula" in return for security guarantees and an end to a dangerous stand-off with US forces.

Trump hailed this as a successful resolution of the crisis, but the short joint statement was not a detailed roadmap to disarmament and it fell to Pompeo to follow up and put meat on the bones of the sparse commitment.

This quest brought him back to Pyongyang on Friday for his third visit and first overnight stay, and he left en route to brief his Japanese and South Korean counterparts in an upbeat frame of mind.

"We talked about what the North Koreans are continuing to do and how it's the case that we can get our arms around achieving what Chairman Kim and President Trump both agreed to, which is the complete denuclearisation of North Korea," he said.

"No-one walked away from that, they're still equally committed. Chairman Kim is still committed, I had a chance to speak to President Trump this morning.

"I know my counterpart spoke with Chairman Kim during the course of our negotiations as well. We had productive, good-faith negotiations."

In practical terms, however, Pompeo mentioned only that officials from both sides would meet on July 12 as a working group to discuss the repatriation of the remains of some US soldiers killed during the 1950-1953 Korean War.

Saturday's talks were held at a villa in an official compound close to the imposing mausoleum where North Korea's former helmsmen Kim Il Sung and Kim Jong Il -- the current leader's grandfather and father -- lie in state.

As the day began, Pompeo left the compound to make a secure call to Trump away from potential surveillance, then returned to restart talks and they continued through a working lunch for almost six hours.

Pompeo, who was on his third visit to Pyongyang, began the outreach when he was still Trump's CIA director and remained the point man on negotiations after the process became public and he became secretary of state.

In comparison to past international nuclear disarmament negotiations, the discussions between Washington and North Korea on thawing ties and dismantling the North's arsenal appear to be proceeding in reverse.

Rather than the two leaders crowning years of detailed negotiation with their one-on-one meeting, the short statement marked instead the start of a diplomatic long slog, and Trump earned the scorn of Korea watchers and non-proliferation experts when he declared the crisis over.

The task of establishing the disarmament programme now falls to Pompeo, who is seeking a formal declaration by the North of the size of its nuclear programme as well as an eventual timetable for it to be ended under international verification and inspection.

Many experts doubt Kim's sincerity -- a nuclear deterrent to US intervention has long been a strategic goal of his isolated, autocratic regime -- and few expect this to be a quick process, even if Washington wants results within a year.