It is the first message from the coach, whose role in the team's predicament has received flak on social media. 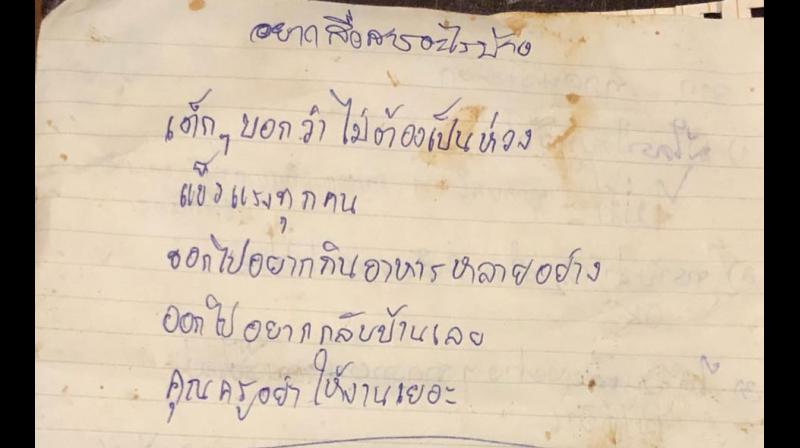 'To all the parents, all the kids are still fine. I promise to take the very best care of the kids,’ read the note written by Ekkapol Chantawong, the sole adult trapped in the cave. (Photo: @ThaiSEAL/Facebook)

Mae Sai (Thailand): The 25-year-old coach of a youth football team trapped for two weeks in a Thai cave has offered his "apologies to the parents" of the boys in a scrawled note released by the Thai Navy on Saturday.

Thailand is holding its breath for the safe return of the group, with heavy rains forecast and fears mounting over the falling amount of oxygen and high level of water in the cave.

Ekkapol Chantawong was for nine days the only adult with the children, aged 11 to 16, until they were discovered on a muddy ledge by rescue divers on Monday."To all the parents, all the kids are still fine. I promise to take the very best care of the kids," he said in a note given to a diver on Friday but published on the Thai Navy SEAL Facebook page on Saturday.

"Thank you for all the moral support and I apologise to the parents."

It is the first message from the coach, whose role in the team's predicament has split Thai social media.

Many have lauding him after reports he gave his share of food to the kids before they were located and helped them get through nine days in the darkness.

Others have criticised him for agreeing to take the young boys into the cave during the monsoon season.

The group entered the cave on June 23 and got trapped as floodwaters tore in.

Read: Could take weeks or even months to get boys out of Thai cave, say experts

"To my grandma and aunt, I'm here. Don't be too worried. Please take care," he added in the letter.