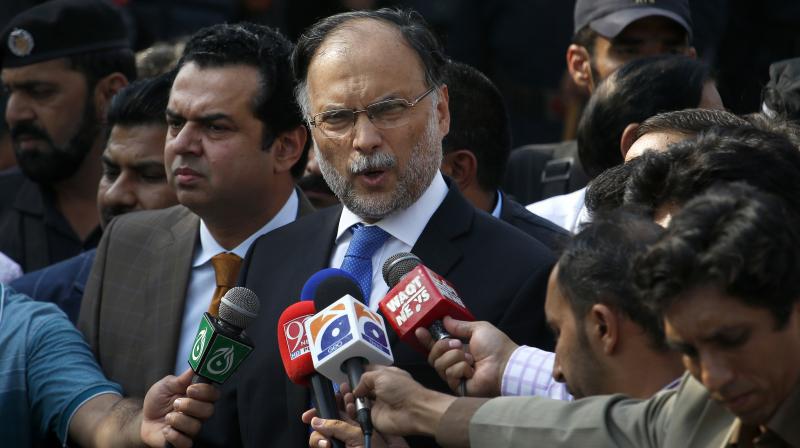 Islamabad: Pakistan on Friday made it clear that the state can declare jihad (holy war) in an Islamic country. Interior Minister Ahsan Iqbal said in the National Assembly that the state reserved the right to declare jihad, and no citizen can issue orders calling for the killing of an individual.

Pakistan on Thursday suffered a deadly terror strike on a sufi shrine in Balochistan province. The attack targted people of one particular sect. In Pakistan, targeting of people on religious and sectarian grounds and issuing of fatwas to the effect has been a widespread phenomenon in recent years.  Mr Iqbal, in his speech, emphasised on curbing the menace of online fatwas and online jihad.

Speaking in the National Assembly, Ahsan Iqbal said that the jihad announcements against one another in cities and villages will make Pakistan a war zone.

Coming down hard on people spreading hatred via social media, he warned that the government will take strict action against such elements under the cybercrime laws. “We need to curb these trends as they are a threat to our internal security,” the minister said.

He added: “The enemy wants Muslims to behead each other. If we continue treading this path of violence and unrest, we wouldn’t even need an (external) enemy to destroy us.”

He said that the people issuing such edicts on the internet could not claim ownership of faith. “They will be dealt with sternly under the cyber crime law,” he maintained.

Mr Iqbal said no individual had the right to question the faith of public office holders who had taken the oath and signed the declaration of Khatam-e-Nabuwwat (finality of the Prophethood).

Earlier on Monday, the government faced a storm of criticism over an amendment to the Elections Act 2017 which ended up affecting a clause regarding Khatam-e-Nabuwwat.

The clause was restored to its original form on Thursday after wave of protests by the opposition parties and various religious groups.

Speaking on the terrorist attack on a shrine in Jhal Masgi a day earlier, the minister said he had sought a report on the incident.

He added that he wanted to send a message to those sponsoring terrorism in Pakistan that such attacks would not help them achieve their nefarious designs. “We need to unite to defeat terrorism. If we remain at each other’s throats, then we will achieve nothing but self-destruction,” he said.