No militant group claimed responsibility in the incident. 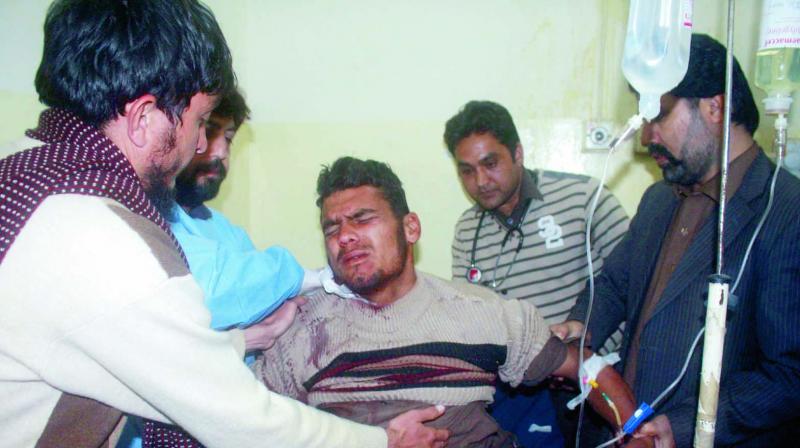 A Pakistani resident injured in a roadside bombing is being treated in Bannu. (Photo: AFP)

Miranshah, Pakistan: A bomb rigged to a motorcycle exploded in a militant-plagued part of northwest Pakistan near the Afghan border, killing nine people, officials said on Wednesday, the latest violence in a recent rise in attacks in the nuclear-armed country.

The bomb was detonated by remote control late on Tuesday when an army vehicle passed in Mir Ali town in the North Waziristan region, said three Pakistani officials who declined to be identified as they are not authorised to speak to the media.

A spokesman for the Pakistani army, which is responsible for security in the volatile, ethnic Pashtun region, did not respond to calls seeking comment.

“Waziristan is bleeding once again,” said police official Tahir Khan in Peshawar, the main city in the northwest, who said he had heard about the blast but had no details. No militant group claimed responsibility.

North Waziristan was long home to Pakistani and foreign Islamist militants linked to the Taliban and al Qaeda until the Pakistani army launched a major push against them in mid-2014.

The military offensive cleared the militants from their bases and largely broke up their networks, forcing them to flee either over the porous border into Afghanistan or to other parts of Pakistan.

But the militants have struck back, sometimes with major attacks.

A week earlier, a senior police commander was killed in a suicide bomb attack in Peshawar.

On Tuesday, the Pakistani Taliban killed a member of an anti-Taliban faction in another part of the northwest, while a bomb aimed at members of another pro-government faction killed five people a week earlier.

The Pakistani Taliban are fighting to topple the government and impose a strict interpretation of Islamic law.

They are loosely allied with the Afghanistan  Taliban who ruled most of Afghanistan until they were overthrown by U.S.-backed military action in 2001.

US defense secretary Jim Mattis visited Pakistan this week to urge it to “redouble” efforts to rein in militants accused of using the country as a base to carry out attacks in Afghanistan. He met with high-ranking officials from Pakistan’s powerful military, including army chief General Qamar Javed Bajwa and lieutenant-general Naveed Mukhtar, the head of the Inter-Services Intelligence spy agency.