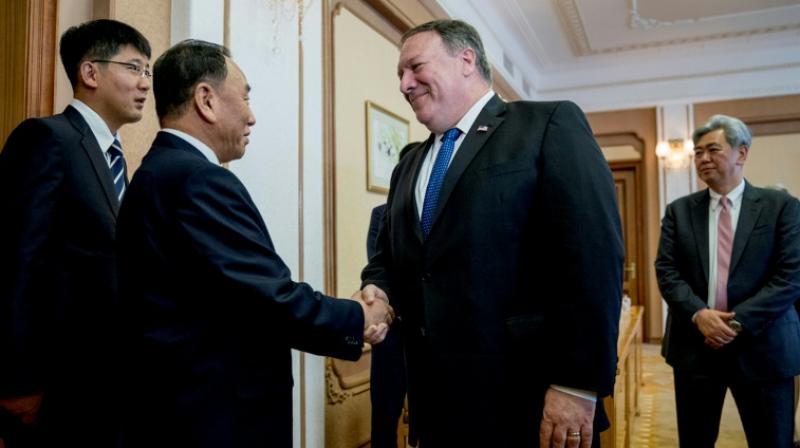 The tone was in stark comparison to Pompeo's characterisation of the talks in Pyongyang as a success, though critically he failed to present any new details as to how North Korea would honour its summit commitment to "denuclearise" in exchange for US security guarantees. (Photo: AFP)

Pyongyang: The peace process between the United States and North Korea was in crisis Sunday after Pyongyang angrily rejected Washington's "gangster-like" demand for rapid nuclear disarmament, after two days of intense talks.

US Secretary of State Mike Pompeo was in Tokyo to brief his Japanese and South Korean counterparts on the talks, which he called positive and declined to comment on Pyongyang's statement rejecting his efforts and appealing to US President Donald Trump to revive the peace process.

In a tweet, Pompeo said he had held a "constructive meeting" with his Japanese counterpart and discussed "maintaining maximum pressure" on North Korea.

He later met Prime Minister Shinzo Abe, who stressed that a resolution of the North Korean nuclear issue was critical to global as well as regional stability.

Speaking privately, US officials suggested the harshly-worded North Korean statement was a negotiating tactic. But after two days of theatrical amity in Pyongyang, it illustrated the gulf that remains between the two sides.

The North's foreign ministry took exception to Pompeo's effort to secure concrete commitments to back leader Kim Jong Un's promise, made at a summit last month with US President Donald Trump, to work towards the "denuclearisation of the Korean peninsula".

In a statement relayed by the KCNA state news agency, a ministry spokesman said Pompeo had pushed "unilateral and gangster-like" demands on the nuclear issue while offering no constructive steps from the US side.

"It seems the US misunderstood our goodwill and patience," he added.

Pyongyang noted that it had already destroyed a nuclear test site -- a concession that Trump has publicly hailed as a victory for peace -- and lamented that Pompeo had proved unwilling to match this with US concessions.

It dismissed Trump's unilateral order to suspend joint US and South Korean war games as a cosmetic and "highly reversible" measure and criticised US negotiators who "never mentioned" the subject of bringing the 1953 Korean War to a formal end with a peace treaty.

"We thought that the US side would come with a constructive proposal... But this expectation and hope of ours was so naive as to be gullible," the statement said.

The tone was in stark comparison to Pompeo's characterisation of the talks in Pyongyang as a success, though critically he failed to present any new details as to how North Korea would honour its summit commitment to "denuclearise" in exchange for US security guarantees.

"These are complicated issues, but we made progress on almost all of the central issues, some places a great deal of progress, other places there's still more work to be done," Pompeo said.

The key sticking point remains the two sides' very different understandings of the commitment Kim made to nuclear disarmament at his summit with Trump.

North Korea has long trumpeted a denuclearisation goal, but one that it sees as a lengthy process of undefined multilateral disarmament on the entire Korean peninsula, rather than a unilateral dismantlement of its nuclear arsenal.

The US insists the summit accord commits the North to take immediate steps towards complete and verifiable disarmament -- and Pompeo's trip to Pyongyang was aimed at securing progress on that front.

"We talked about what the North Koreans are continuing to do and how it's the case that we can get our arms around achieving what Chairman Kim and President Trump both agreed to," Pompeo said, after more than eight hours of talks over two days with Kim Jong Un's right-hand man Kim Yong Chol.

"No-one walked away from that, they're still equally committed," he said, just hours before the North issued their view of the negotiations.

In practical terms, Pompeo mentioned only that officials from both sides would meet on July 12 to discuss the repatriation of the remains of some US soldiers killed during the 1950-1953 Korean War.

Professor Yang Moo-Jin at the University of North Korean Studies in Seoul said Pyongyang's criticism of Pompeo was aimed at driving a wedge between Trump and his top officials.

"The North is trying to get an upper hand in further negotiations," Yang said.

Pompeo, who was on his third visit to Pyongyang, began the outreach when he was still Trump's CIA director and remained the point man on negotiations after the process became public and he became secretary of state.