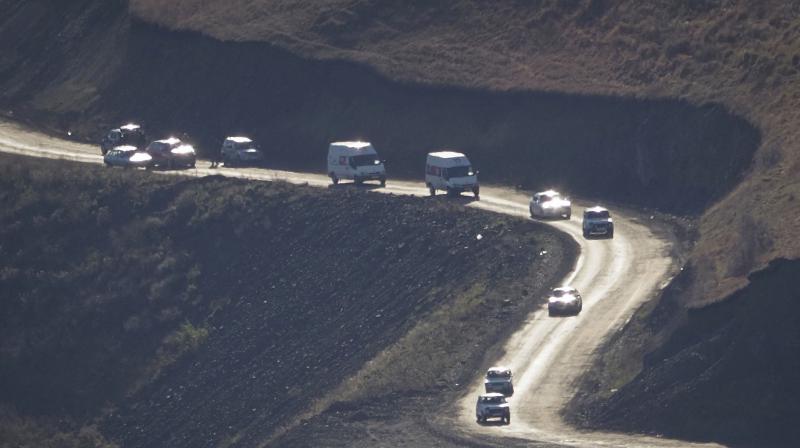 Cars with people leaving the separatist region of Nagorno-Karabakh to Armenia approach the border of Armenia, Sunday, Nov. 8, 2020. (AP Photo)

BAKU: Azerbaijani President Ilham Aliyev said Sunday that his country's forces had captured the town of Shusha in Nagorno-Karabakh, in what would be a major strategic victory over the region's Armenian separatists.

"With great pride and joy, I inform you that the town of Shusha has been liberated," Aliyev said in a televised address to the nation, as Armenian officials reported heavy fighting for the town.

He said November 8 would "go down in the history of the Azerbaijani people" as the day "we returned to Shusha".

The town and surrounding areas have seen fierce fighting in recent days, as Azerbaijani forces seek to make further gains six weeks after new clashes broke out over Nagorno-Karabakh.

There was no immediate reaction to Aliyev's claim from Armenia, but officials had earlier confirmed there was heavy fighting around Shusha.

"Over the night, the most ferocious combat has unfolded in the vicinity of Shushi," Armenian defence ministry spokeswoman Shushan Stepanyan said on Twitter, using the Armenian name for the town.

Shortly before Aliyev's announcement the Armenian government said on Twitter that "heavy and decisive fighting continues for Shushi" and called the taking of the town "an unattainable pipe dream for Azerbaijan".

"Despite heavy destruction, the fortress city withstands the blows of the adversary," it said.

"The fighting continues in Shushi, wait and believe in our army," Armenian defence ministry official Artsrun Hovhannisyan said on Twitter, using the Armenian name for the town, shortly after Azerbaijani President Ilham Aliyev announced its capture.

The hilltop town is only 15 kilometres (nine miles) from Karabakh's main city Stepanakert and on the main road that links the unrecognised republic's capital with the territory of Armenia, which backs the separatists fighting for Karabakh's independence.

Clashes broke out in late September between Azerbaijan and Armenia-backed separatists over control of Karabakh, a region that broke from Baku's control during a war in the 1990s.

The recent flare-up has been the worst in decades, killing more than 1,000 people, including civilians, although the death toll is believed to be much higher.