Ex-PM may be disqualified from polls; fugitive son sentenced too. 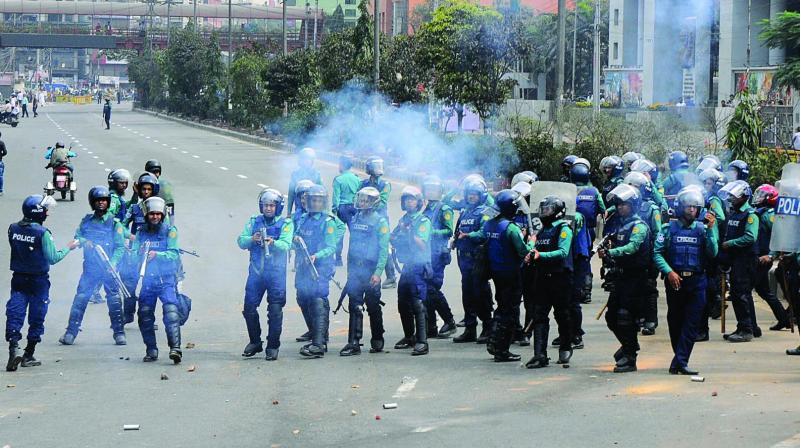 Dhaka: Khaleda Zia was on Thursday sentenced to five years rigorous imprisonment for corruption, a body blow for the ex-Bangladeshi Prime Minister and main Opposition leader who may be disqualified from contesting the next general elections in December.

The 72-year-old three-time former Prime Minister was sentenced by Dhaka’s special court in connection with the embezzlement of about $250,000 in foreign donations meant for the Zia Orphanage Trust, named after her late husband Ziaur Rahman, a military ruler-turned-politician.

The verdict simultaneously sentenced Ms Zia’s “fugitive” elder son and Bangladesh Nationalist Party’s (BNP) senior vice president Tarique Rahman as he was tried in absentia. Mr Rahman and four others have been sentenced to 10 years in prison.

Judge Mohammad Akhtaruzzaman, who delivered the judgment, said: “The case was proved beyond any doubt against the accused.”

The case is one of dozens pending against Ms Zia, who has been a rival of Prime Minister Sheikh Hasina for decades. The charges against her had already led to her boycotting polls in 2014, which triggered widespread protests at the time.

Sentencing Ms Zia to rigorous imprisonment, the judge read out the abridged version of the 632-page verdict in 10 minutes.

He said that though all the convicts played identical role in the crime, Ms Zia was given a lesser term taking into account her “age and social status”.

The court also said that the defence tried their best to hinder the trial proceedings as they sought time for 35 occasions in the name of changing the court.

Reacting to the sentencing of her arch-rival, Prime Minister Hasina said, the case as natural consequences of Ms Zia’s past deeds and accused her of looting public property and burning to death over 500 people in a “demonstration of extreme brutality”.

Ms Zia became the second head of the government after former military dictator-turned-politician HM Ershad to be convicted in a graft case.

Legal experts said the verdict may jeopardise her career as she may be disqualified from contesting polls, including the general elections slated for December.

The ruling came four years after Ms Zia and others were indicted in the case.

“We will challenge the verdict in the High Court... God willing we will get justice there,” Ms Zia’s chief counsel Khondker Mahbub Hossain told reporters.

Immediately after the verdict was read out, security personnel escorted Ms Zia to a white vehicle which took her to old Dhaka’s Central Jail.

The original jail was relocated recently to suburban Keraniganj but officials said they renovated the day care centre of the facility to accommodate the ex-premier.

Home minister Asaduzzaman Khan said: “She served as the Premier thrice and is the chairperson of a big political party... Considering her age and status she will be provided all facilities she deserved.”

TV footages showed Ms Zia stood in gloom covering her eyes in a dark sunglass as the security forces escorted the vehicle to the nearby jail.

There was tight security in Dhaka streets as the ex-Prime Minister was on her way to a court with a convoy of armed police and Ms Zia’s private security personnel’s vehicles slowly escorting her to the court in downtown Dhaka from her Gulshan residence.

Witnesses said hundreds of Ms Zia’s supporters thronged the streets leading to the court complex and followed the convoy, causing clashes with the police at places.

The police had to use tear gas shells and fired rubber bullets as the BNP activists exploded crackers and pelted stones at Kakrail area soon after the convoy passed the spot.

Earlier at a press conference on Wednesday, Ms Zia blamed the ruling party — the Bangladesh Awami League led by Prime Minister Hasina — for unleashing a “reign of terror” and claimed that she was implicated in a “false case”.

Meanwhile, Awami League general secretary and road transport minister Obaidul Quader said that the past military-backed interim government filed the case against Ms Zia in 2008 with the incumbent government having no links to the process.

Political analysts said the BNP might be split as several senior leaders could disassociate them from Zia as her son Rahman, the senior vice-president of the party, was wielding authority from London, ignoring the party veterans.

Mr Rahman is believed to have sought asylum in the UK to evade justice, as he is also being tried on several charges including the August 21, 2004 grenade attack on a rally of the then Opposition Awami League when 23 people were killed and prime minister Hasina narrowly escaped the attack.

The ex-Premier on November 30, 2014 lost her last ditch effort to evade the graft trial as the Supreme Court turned down her second “leave to appeal” petition challenging her indictment and asked her to face trial in the lower court.

The high court earlier validated the trial in the lower court which on March 19, 2014 indicted Ms Zia on two graft charges brought by the Anti-Corruption Commission.

Ms Zia and three of her aides were accused of syphoning off about $400,000 from the Zia Charitable Trust alone. She is also accused of leading a group of five people, including her eldest son, in embezzling another $277,000 funds.