The govt has reserved 56 per cent of civil service jobs for the families of veterans from the independence war and disadvantaged minorities. 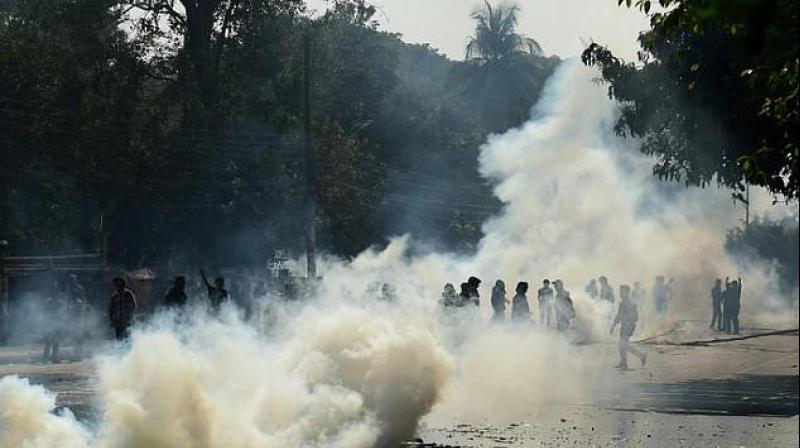 'They fired rubber bullets and tear gas at us. They beat us with batons,' said Hasan Al Mamun, the leader of the anti-quota student group. (Photo: AFP)

Dhaka: Bangladesh police on Sunday fired tear gas at thousands of students who gathered in the capital demanding cuts in "discriminatory" job quotas.

The Shahbagh square campus in Dhaka University turned into a battleground after thousands of students chanted slogans and staged sit-in demonstrations in one of the largest protests against the government of Prime Minister Sheikh Hasina.

Hasina's administration has set aside some 56 per cent of civil service jobs for the families of veterans from the war of independence and disadvantaged minorities, leaving most university graduates to fight for only 44 percent of the jobs.

Organisers said they were holding peaceful protests when police started firing tear gas and rubber bullets and used batons and water canon to clear students from the square.

"They fired rubber bullets and tear gas at us. They beat us with batons," said Hasan Al Mamun, the leader of the anti-quota student group, which was behind the nationwide protests in state-run universities and colleges.

Al Mamun said tens of thousands of students joined the demonstrations across the country.

Police declined to comment on the number of protesters.

Al Mamun said they were demanding the government job quotas be reduced to only 10 per cent.

"These quotas are discriminatory. Due to the quota system, 56 per cent of the jobs are set aside for five percent of the country's population. And 95 percent people can compete for the (remaining) 44 per cent," he said.

He said they would continue protests until the government accepted their demand.

Students were particularly angry at the 30 percent quota set aside for the descendants of veterans from the 1971 war of independence.

Hasina, whose father was the architect of the country's independence from Pakistan, has rejected demands to slash the job quotas.