Democratic People's Republic of Korea was proclaimed on Sept 9, 1948, 3 yrs after Moscow and US divided peninsula. 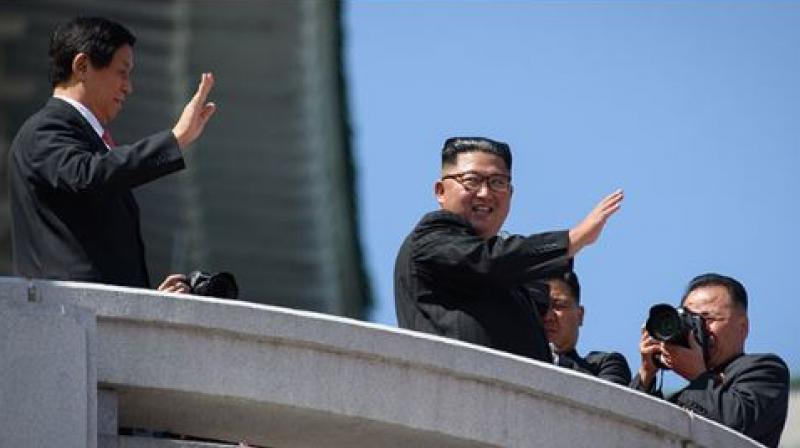 Kim Jong Un showed off his friendship with China, raising the hand of President Xi Jinping's envoy as they saluted the crowd together afterwards (Photo: AFP)

Pyongyang: Thousands of North Korean troops paraded through Pyongyang Sunday as the nuclear-armed country celebrated its 70th birthday, followed by artillery and tanks, but it refrained from displaying the intercontinental ballistic missiles that have seen it hit with sanctions.

Instead leader Kim Jong Un showed off his friendship with China, raising the hand of President Xi Jinping's envoy as they saluted the crowd together afterwards.

The Democratic People's Republic of Korea, as the North is officially known, was proclaimed on September 9, 1948, three years after Moscow and Washington divided the peninsula between them in the closing days of the Second World War.

Such set-piece dates are a mainstay of the North's political calendar, particularly when round numbers are involved, and have long been occasions for showing off its latest hardware. 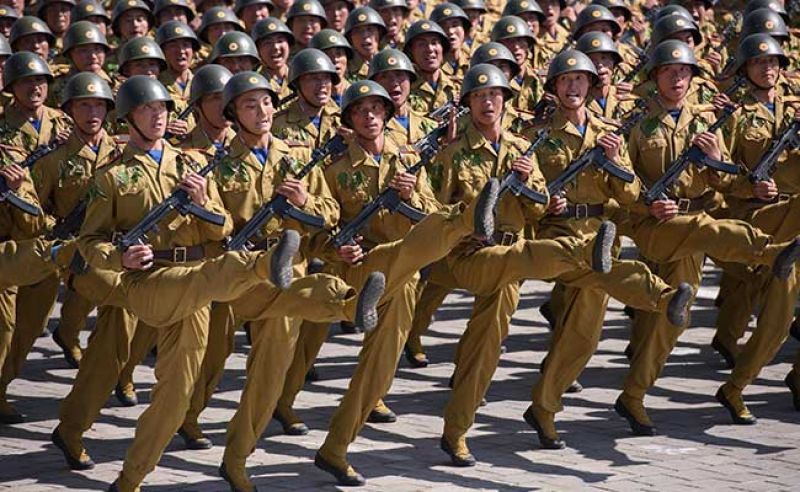 But too militaristic a display might have risked upsetting the recent diplomatic dalliance on the peninsula, after Kim's Singapore meeting with US President Donald Trump in June and his third summit with the South's President Moon Jae-in due in Pyongyang later this month.

After a 21-gun salute, dozens of infantry units marched through Kim Il Sung Square, some in night-vision goggles or wielding rocket-propelled grenade launchers, as the current leader -- the founder's grandson -- looked on from a rostrum.

Li Zhanshu, one of the seven members of the Chinese Communist party's Politburo Standing Committee, the country's most powerful body, sat next to him, the two of them occasionally exchanging comments. 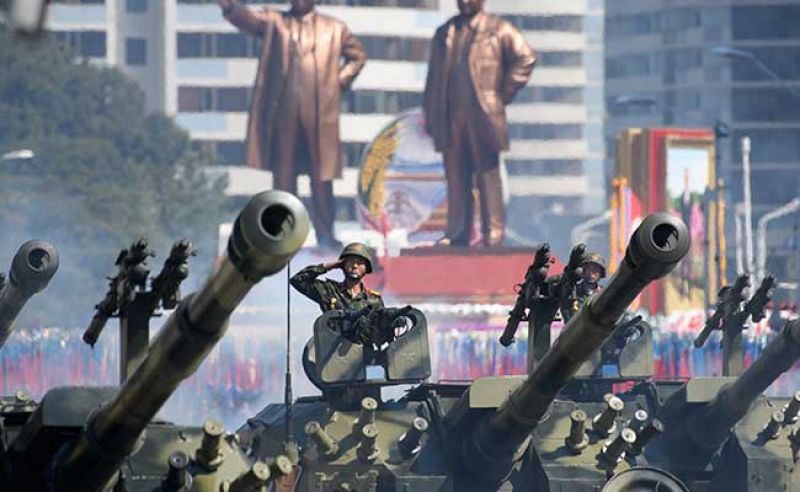 At one point jets trailing red, white and blue smoke -- the colours of the North Korean flag -- roared above the Juche Tower, the stone monument to Kim Il Sung's political philosophy.

Finally came the missiles, the traditional climax of the parades. But the only ones on show were the blue Kumsong-3, an anti-ship cruise missile, and the Pongae-5 surface-to-air weapon.

There was no sign of the Hwasong-14 and -15 missiles that can reach the mainland United States and changed the strategic balance when they were first tested last year.

"It looks like the North Koreans really tried to tone down the military nature of this," said Chad O'Carroll, managing director of Korea Risk Group.

"There was no display of ICBMs, IRBMs (intermediate-range ballistic missiles), which would really not have sat well with the whole idea that North Korea is committed to ultimate denuclearisation. So I think it will be well received."

Immediately after the parade thousands of citizens walked through the square, escorting floats displaying economic themes and calls for Korean reunification.

In April, Kim declared that the North's development of nuclear weapons had been completed and "socialist economic construction" would be the new strategic priority.

In warm sunshine the marchers waved bouquets and flags and chanted "Long live" to the leader.

Diplomatic invitations for the anniversary went out around the world, but the only head of state who attended was Mauritanian president Mohamed Ould Abdel Aziz -- although AFP spotted French actor Gerard Depardieu seated in a section below the main tribune.

After the civilian rally Kim and Li saluted the crowd, the North Korean raising his guest's hand into the air.

Beijing is its neighbour's key diplomatic protector and trade partner, and after years in the deep freeze over the North's missile and nuclear tests their ties have warmed rapidly this year, with Kim visiting China three times to meet President Xi Jinping.

Speculation that Xi might reciprocate for the anniversary did not come to pass -- Hu Jintao was the last Chinese president to visit in 2005 -- but O'Carroll said it appeared that Pyongyang was looking to promote its friendship with Beijing.

"That's also got some impact on US-DPRK negotiations of course because China is still a very important player and its presence here with such a high level delegation is intended in some way to remind the US of that."

Washington is seeking the "final, fully verified denuclearisation of North Korea", while Pyongyang has only publicly affirmed its commitment to working towards the denuclearisation of the Korean peninsula, a euphemism open to interpretation on both sides, and the process has become bogged down in recent weeks.

"Anniversaries are important in the DPRK, and this one is particularly so," said Evans Revere of the Brookings Institution think-tank in Washington.

"These celebrations are also occasions for the leader to demonstrate accomplishments and national power, and to take credit for them."