India pushes Russia for 'return to talks, diplomacy' in Ukraine

External Affairs Minister S. Jaishankar once again conveyed India’s message to Russia that 'this is not an era of war' 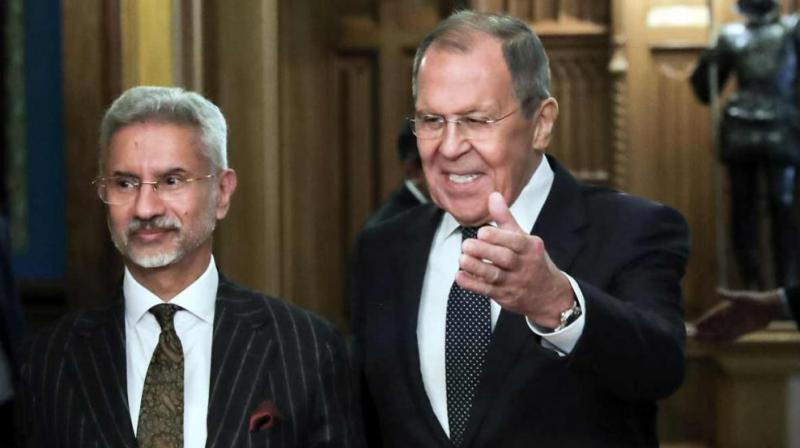 NEW DELHI: In “open and productive” talks with Russian foreihn minister Sergey Lavrov on Tuesday in Moscow, external affairs minister S. Jaishankar once again conveyed India’s message to Russia that “this is not an era of war” and that New Delhi advocates a “return to dialogue and diplomacy” on the Ukraine conflict as well as “respect for international law and support for the UN Charter”, in what clearly articulated New Delhi’s anguish over the prolonged conflict.

The minister also said the global economy was too “inter-dependent” and that any conflict would have adverse implications for the world, including in food security. The two foreign ministers also discussed ways to strengthen bilateral cooperation and the special strategic partnership between the two in defence, trade, investment, energy, space and civil nuclear energy. Mr Jaishankar also referred to the “substantial and time-tested” bilateral ties with Russia and the initiative to make this more “durable, sustained and balanced”.

Emphasising the need -- at a joint press conference with Mr Lavrov -- for the time-tested bilateral defence relationship to “continue smoothly”, Mr Jaishankar also conveyed India’s growing concerns over the trade imbalance with Russia amid flourishing and thriving bilateral trade ties. Mr Lavrov said bilateral trade between the two nations was already about $17 billion and the two nations will increase that to about $30 billion. Mr Lavrov also spoke of economic cooperation with India in the Russian Far East region and the North-South transport corridor. The Russian foreign minister said Russian technologies in the civil nuclear sector will continue to give India access to “clean and safe” energy, adding that both nations also discussed the “joint production of modern weaponry”.

Other issues discussed at the talks included India’s concerns over cross-border terrorism from Pakistan, the Indo-Pacific region, the humanitarian situation in Afghanistan and the need for the Taliban to fulfil its commitments and the necessity of not allowing Afghan soil to be used for terrorism against India.

Mr Jaishankar echoed Prime Minister Narendra Modi’s words to Russian President Vladimir Putin uttered at the Uzbek city of Samarkand in mid-September this year that “this is not an era of war”. He added India would support any initiative to “stabilise the global order”.

In his opening remarks ahead of the talks, Mr Jaishankar said: “Our meeting today is, of course, devoted to assessing the state of our bilateral cooperation; exchanging perspectives on the international situation and what that means to our respective interests. Where bilateral ties are concerned, you would agree that it is our objective today to fashion a contemporary, balanced, mutually beneficial, sustainable and long-term engagement. Especially as our economic cooperation increases, this is a significant imperative. We would be discussing how our shared goals are best achieved.”

He added: “Where international situation is concerned, the last few years of the Covid-19 pandemic, financial pressures and trade difficulties; these have taken a toll on the global economy. We are now seeing the consequences of the Ukraine conflict on top of that. There are also the more perennial issues of terrorism and climate change, both of which have a disruptive impact on progress and prosperity. Our talks will address the overall global situation as well as specific regional concerns. India and Russia engage each other in an increasingly multi-polar and re-balanced world. We do so as two polities who have had an exceptionally steady and time-tested relationship.”

Mr Jaishankar also met Russia’s deputy PM and minister of trade and industry Denis Manturov, his counterpart for the India-Russia Inter-Governmental Commission on Trade, Economic, Scientific, Technological and Cultural Cooperation, that was also held on Tuesday in Moscow.

In his address there, he said: “Our two countries have a long tradition of close cooperation and friendship which is reflected in our Special and Privileged Strategic Partnership… The cooperation between our two countries continues to make steady progress. I believe, we are on track to achieve a target of $30 billion in terms of the annual trade turnover.” He added: “I am confident we will be successful in realising the optimum potential of our trade and economic relations. And that we will also be able to address the trade deficit and market access issues that are between us.”